As the school year dwindles, many seventh-grade students at Holy Rosary School await an outing during the school day: the annual Safety Patrol trip to Burdette Park Aquatic Center, a reward for students serving in Safety Patrol. Both of my sons have been patrol guards; Jackson, completing seventh grade, celebrated in the swim outing last week. There are nearly 30 students on the patrol squad — most of the seventh grade — and that explains why I recall my son serving about only five times. Most Holy Rosary students arrive to school and are picked up in cars; still quite a few walk or are picked up across Green River Road in the mall parking lot. Guards had to be extra attentive and cautious last week during the Summer Social; in fact, the release of students was delayed a few minutes due to heavy traffic in the area. 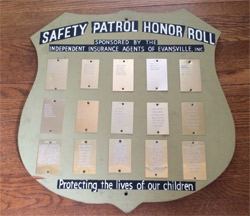 I was a Safety Patrol guard when I was in sixth grade at Caze Elementary School. When my mother retired from teaching, also from Caze, she was given the Safety Patrol plaque from the Patrol Room, where guards from 1974 to 1988 were honored by name. The plaque also recognizes the program sponsor, The Independent Insurance Agents of Evansville. I believe my whistle is saved somewhere in a box.

The popularity of Safety Patrol was satirized in a 1998 Disney Move, “Safety Patrol,” that was pretty funny. Famous people who served in the Safety Patrol include Presidents Jimmy Ford and Bill Clinton, five U.S. Supreme Court justices or former justices, 21 astronauts, and five Olympic Gold Medalists including Bruce Jenner.