With an unfiltered view of the bustling neon-lit casino at Tropicana Evansville (421 N.W. Riverside Drive), The Brew Brothers Tap House offers casino patrons, hotel guests, and Evansville residents an upscale casual dining experience like no other.

Rebranded in May 2019 after Eldorado Resorts, Inc. purchased Tropicana Entertainment, Inc., Brew Brothers Tap House’s journey to the city began in 1995 when Casino Aztar, the first riverboat casino in Indiana, opened at the current location of the USS LST 325 at 610 N.W. Riverside Drive. That same year, more than 1,000 miles away, Eldorado Resorts opened The Brew Brothers Brewpub in Reno, Nevada — the first brewery owned by a casino in the country.

In Evansville, the casino’s success prompted a move on land in October 2017, making it the first land-based casino in Indiana. It was during this move that Executive Director of Non-Gaming Operations Ali Hashemy and his team opened the restaurant — then called The Tap House — and the casino was renamed Tropicana.

“When we moved from the boat, we wanted to bring to Evansville a Vegas-feel casino,” says Hashemy. “It isn’t just a casino for people to gamble, but a whole entertainment experience.”

Hashemy began his career with Tropicana in 2015 as the food and beverage director, taking on his current role overseeing the events center, two hotels (Tropicana and Le Merigot), Cavanaugh’s Steak House, and The Brew Brothers Tap House when the casino relocated. 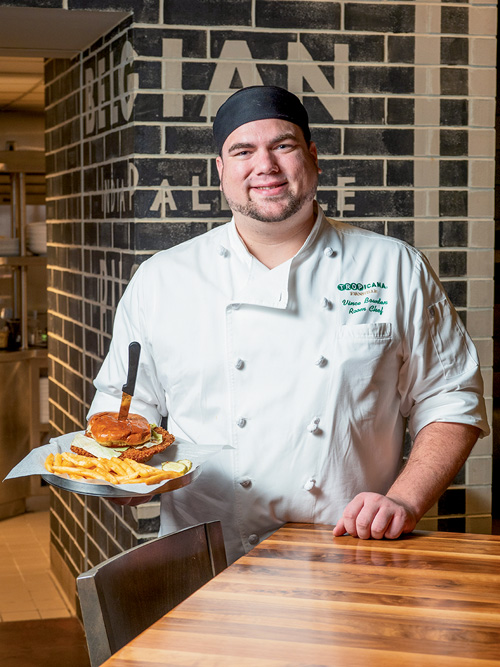 During the 2019 Eldorado merger, Hashemy and his team created a new brand by infusing the brewpub’s offerings with some of their Tap House favorites and local preferences to create the current menu.

“We want our customers to have a combination of all,” he says.

Room Chef Vince Bowden ranks his favorites based on the preparation process and loves cooking the Burnt Ends entrée — a pile of enticing beef burnt ends topped with homemade barbecue sauce with French fries, cole slaw, and a side of pickles.

While each item on the menu is different and caters to an adult palate — you must be 21 years old or older to enter — they all include a house-made ingredient or process.

“Almost everything is homemade,” says Bowden. “The main things we order are just ingredients to make the homemade items.”

According to Bowden, the All-American burger, two beef patties layered with American cheese, lettuce, tomato, pickle, onion, and the signature brew spread, is the most popular item on the menu.

Delicious food isn’t all that keeps patrons from far and wide coming back. Staying true to its brewery roots, Brew Brothers Tap House offers 36 beers on tap. The line-up changes from week to week, but a few staples and 10 local beers are available every day.

Stephanie Middleton, beverage manager, says Blue Moon is Evansville’s favorite no matter what. Zombie Dust by 3 Floyds Brewery is a close second, with seasonal options, like this year’s Electric Reindeer by Sun King, coming in third.

“You get to try a bunch of different [beers],” says Middleton. “Every time you visit there will be something new and different.” 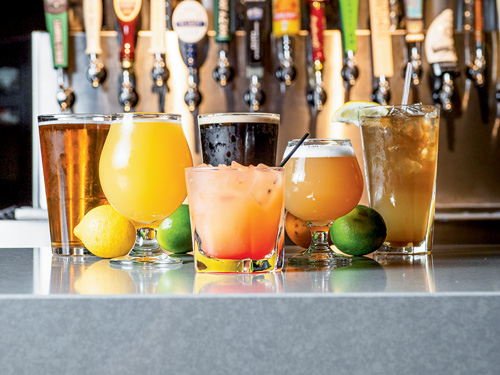 In order to keep their beer experience high-quality, Brew Brothers implements several innovative techniques. They use Untappd, a social media platform for craft beer fans, to promote their beer.

Hashemy also helped design a pipe system in the rafters of the dining room that carries drafts from the kegs in storage to the tap. The cooling pipes keep the beer fresh and connect to a digital system that updates staff and customers on the quantity and quality of the kegs.

At the core of The Brew Brothers Tap House is Hashemy and his teams’ goal of providing a one of a kind dining experience. Hashemy calls the team his second family, the restaurant his home away from home, and says the casino’s support of the community through charitable giving adds to its uniqueness.

“If you want to be truly entertained and do more than just eat — come here,” he says. “I love that we’ve done something different with the Tap House when we give the casino experience with more entertainment. You can see and feel the energy of the casino without spending a dime on gambling. You can’t get this experience any place else in town.”

Despite overwhelming success throughout its years of development, Brew Brothers Tap House wasn’t spared from the negative side-effects of the COVID-19 pandemic. As the full staff — who, like customers, receive temperature checks as they enter the building through secure checkpoints — returned from quarantine to serve a limited menu during shorter hours and the casino operates at 50 percent capacity, another curveball was thrown. 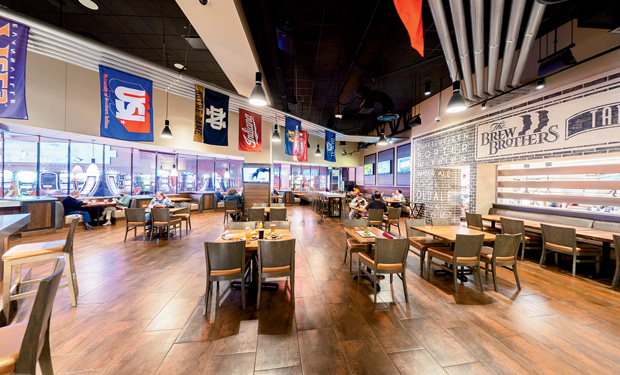 As a result, Tropicana was sold for $480 million to Gaming Leisure Properties and Twin River Worldwide Holdings on Oct. 27. The buyout won’t be completed until mid-year 2021 and Hashemy says Evansville residents have nothing to worry about.

In 25-plus years of casino experience, he has worked under about seven companies — mergers are part of the business.

“People come here because of our food, the experience, and most importantly because of how we make them feel,” says Hashemy. “Whether it’s Brew Brothers or just the Tap House, we are going to continue that. It’s about what we have to offer no matter what name is on top of the building.”

On Tap
Location: 421 N.W. Riverside Drive, inside Tropicana
Phone: 812-433-4000
Website: tropevansville.com/venue/restaurants/brew-brothers-tap-house
Dining Hours: Closed Monday and Tuesday.
11 a.m. to 10 p.m. Sunday and Wednesday to Thursday. 11 a.m. to midnight Friday
and Saturday
Adult Beverages: Yes. Must be 21-plus to enter.
Prices: $3 to $35