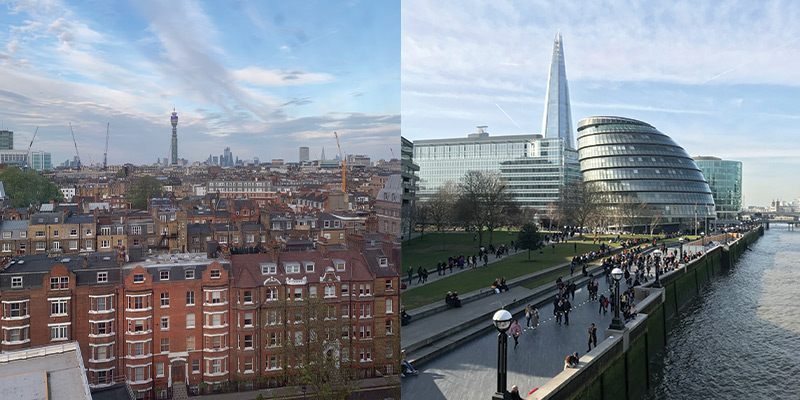 Earlier this spring I visited London with my friend Janice. The calendar said it still was winter but the United Kingdom was experiencing an early spring. We went to visit our kids — my son Maxwell and Janice’s daughter Meghan, Butler University students studying at the University of Westminster.

▲ Left: Maxwell Tucker’s view from his 12th floor dorm room in Marylebone Hall — 60 square feet and a great view. The BT Tower, in the center of the photo, is about a mile from his dorm. Built in 1964 it is 581 feet tall. The Shard, far right in the frame, is about 5 miles from the University of Westminster, Marylebone. Completed in 2012, at 1,016 feet, the Shard is the tallest building in the U.K., the tallest building in the European Union, and the fifth-tallest building in Europe. Right: In Southwark, along the South side of the Thames River, you’ll see the Shard seeming to loom above the City Hall, where the Mayor of London offices are located.

We managed to keep up with the college kids and make the most of our time from our accommodations at Montagu Place in the Marylebone neighborhood of London, a short walk from the University of Westminster’s urban campus, located across the street from the Baker Street tube station. Here’s how we spent our time, in two (about) 300-word installments.

We departed Nashville, Tennessee, on our British Airways flight on a Wednesday evening and arrived at London Heathrow International at noon on Thursday. After a quick nap, we visited the urban campus of the University of Westminster, Marylebone, adjacent to the busy Baker Street tube station and across the street from Madame Tussaud’s — our six-day tour of London began.

Here’s what we visited, where we dined, and what enjoyed:

Grazing Goat — A favorite of Max’s and Meghan’s for the best fish and chips and steak and ale pies of the trip.

Selfridges — Don’t make the mistake of thinking Harrod’s is the only department store to visit.

Borough Market — A foodie’s paradise. It has existed in one form or another for 1,000 years.

Marquis of Granby — It’s here we remembered in the U.K. chips are fries and crisps are chips.

Angel in the Fields —The Londonist says it is compete antithesis of the high-priced eateries and pubs that dominate Marylebone.

Clarette — A swanky French wine bar and bistro owned by the heiress to Château Margaux wine estates in Bordeaux.

Parliament Square, next to Westminster Abbey, surprisingly is home to a statue of Abraham Lincoln, a full size replica of the acclaimed original in Chicago’s Lincoln Park.

Westminster Abbey — Arrive in time to tour the Gothic abbey church; we did not.