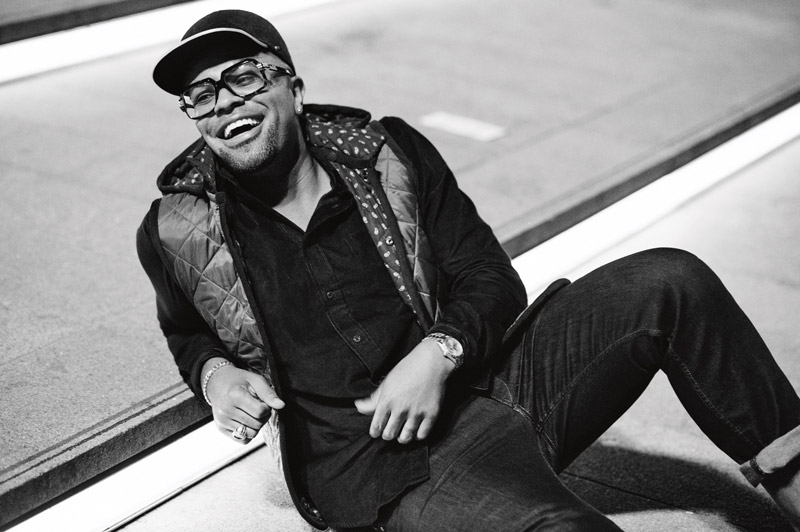 Apart, Philip Lawrence and Bruno Mars were broke, struggling musicians. Together, they are an unstoppable force defining the way today’s pop music sounds.

As part of the song-writing and producing trio The Smeezingtons, Lawrence, Mars, and Ari Levine have crafted numerous Billboard hits such as rapper Flo Rida’s “Right Round,” rapper B.O.B.’s “Nothin’ On You,” and pop singer Cee-Lo Green’s “Forget You.”

It’s been that way ever since Lawrence, an Evansville native, met Mars in 2006. That’s when music critics began attaching every buzzword-worthy adjective to them. They’ve been celebrated for their hot beats and smartly crafted No. 1 singles such as “Grenade,” “Just the Way You Are,” and “Locked Out of Heaven,” all chart toppers crooned by Mars.

But what’s been critical to Lawrence’s success has been his Evansville roots — and his musically entrenched family. His mother, Cheryl, was the director of the Sounds of Grace touring church choir for 35 years, his father, Philip Sr., was a radio deejay for WJPS in the 1970s, and his second cousins, Gina Moore and Joan Moore-Mobley, make up The Browne Sisters, arguably the most iconic Evansville R&B and blues band.

The never-better Lawrence, a 1992 Memorial High School graduate, has released his first solo album, Letters I Never Sent, and he’ll take the stage Sept. 14 at the Victory Theatre for his first performance showcasing his work. Joining him will be The Browne Sisters, and his brother and sister, Shane and DeVonna, a gospel duo known as The Lawrences. It’s a carefully curated cast of the musicians who have shaped Lawrence’s life.

Still feeling unprepared for the knockout concert? Then just turn your radios on — and up.

For three weeks, I counted every time I heard a Bruno Mars song on the radio. The grand total: 137. That’s insane, right?
No way! My business manager would be happy to hear that.

What were your first memories of music?
My dad, a deejay, had crates and crates of records lying around the house, everything from the Eagles to Stevie Wonder. That has influenced me a lot with what I am doing with Bruno because we are all over the place, too, sometimes.

You tweeted recently that you fulfilled your dream of selling out the Staples Center. At what point in your career did you think that dream would be a reality?
At the risk of sounding narcissistic, I think I always had belief in myself. I’ve always felt like I’ve had something to offer when it came to music.

There were a lot of times along the way when I didn’t know how it would happen, but I was always positive that I could do something great.

Surely you had at least one moment of doubt.
There was a period that we were so broke that I talked to Bruno about moving back from Los Angeles to Orlando where I had once had a gig at Disney World, to save up some money.

But my family had been supportive through my whole career. My mom and dad have a perfect match of practicality and “follow your dreams.”

Do you write your best songs with Mars?
I think so. At the risk of sounding cliché, we complete each other in that sense.

What I remember most from the first time I met Bruno in late 2006 at a recording session a mutual friend had invited us to was the joking around. Our personalities jelled really well. That, beyond our musical talents, has kept us together this whole time. Because we’re buds. We’ve discovered that we are at our best when the atmosphere is fun, loud, and loose. That enables us to be more creative.

What will surprise people about your solo album?
I think people have associated me so much with Bruno, and they might assume I do the same style of music on my own.

So they might be surprised to hear my rock and folk influences. I’ve listened to and loved that music for a long time, from Billy Joel to Lenny Kravitz to Seal. I’ve always liked the sound of my voice singing those kinds of songs, and my songwriting style is at ease with that style as well.

What’s the key to telling a story through a song?
Songs are like a movie, but you only have three and a half minutes to have it make sense. So, first, you have to be passionate about it. Because if you are, you’ll look for the things that captivate an audience. What captivates are songs that come from an honest place, and people relate to honesty.

How did writing music for your album compare to writing for Mars’ work?
There are constraints in the pop world on what you can talk about and what it should sound like for radio stations to even play it.

For my album, I wanted to take the exact opposite approach. I just wanted to be honest, and like we were just talking about, tell stories.

It was a cathartic experience for me to hear myself sing again. When I wrote these songs, I was in “Bruno world” heavy. I loved it. We were making him a star and making music we loved.

But I just wanted to find my own voice. So to my luxury, I didn’t have to worry about what a radio station would think. That helped me tell these honest stories.