“As a family, our vacations were dune buggies, four-wheelers, and dirt bike trips. Around 5 or 6 years old, I would try everything my older brother would do,” says the owner and designer of Y Factor Studio, an interior design business located on Main Street in Downtown Evansville.

That love of extreme sports and interesting vehicles has followed her through her life. While she spent most of her early years on various sport bikes, the 1979 Chevy Corvette her father Danny Scales purchased from a retired neighbor in 1988 has been a staple in her life.

“He taught me how to drive in this Corvette. I drove it to proms and have great memories in it,” says Jennifer. “When I went to college, my dad used the car as an everyday car.”

Over time, several issues with the car saw it stored in her father’s garage until three years ago, when Jennifer had the itch to own another fast vehicle. With Danny retiring, Jennifer proposed a deal — she would furnish and pay for any parts needed if her father would restore the Corvette. Danny agreed, and 1,800 man-hours later, the C5 1979 Corvette has been back on the road since March. Its rebuilt 434 small block Chevy engine registered 560 horsepower and 550 pounds of torque on a dynamometer test, giving it quite a kick when the pedal hits the metal. 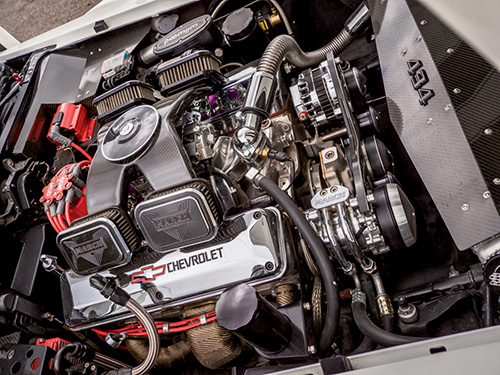 This year, Danny’s been able to feature the car in five car shows, most recently nabbing Best of Show at the Zach Wardrip Foundation Car Show in Evansville.

“What I like is that it’s a restomod. It looks like a stock car, but when you get closer, you can tell everything everywhere on it is not stock,” says Danny. “People’s first impression is that it’s just another C5 Corvette.”