Springs Are My Thing 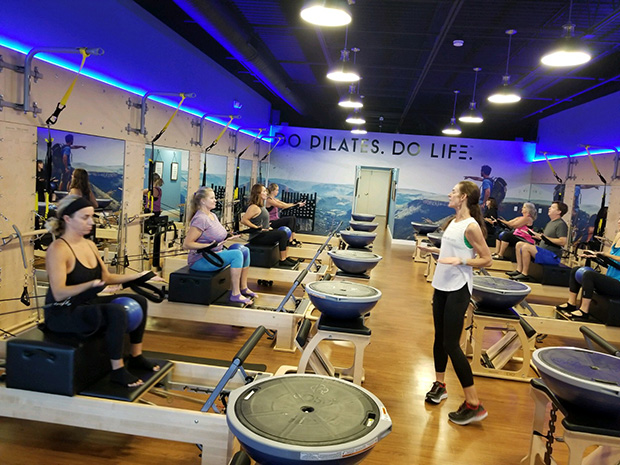 ‘He thought they said Pie and Lattes’

When people ask me if I played sports in school, I laugh. Then I tell them I was a “flag girl.” I was active, but not athletic. “Working out” wasn’t a term in our household; my sisters and I took dance lessons. In my 20s, I jumped on the aerobics craze doing the “Grapevine” with other women with big hair and spandex. Then came step aerobics and yoga. For a few years I ran — slowly. I found my exercise Zen finally with walking and hot yoga, practiced for 90 minutes in a room heated to more than 100 degrees with 50 percent plus humidity.

Today I walk outside with a friend at 4:45 a.m. several mornings a week. I’ve also learned springs are my thing. I’m doing Pilates at Evansville’s new Club Pilates, opened by Jeff and Bussie Cox of Newburgh, Indiana. The discipline always interested me; I read up on the founder, German Joseph Pilates (1883-1967) when I was younger and became interested in the contraption the fitness regimen uses — the reformer.

Pilates was a sickly child who turned to exercise to battle his ailments. At the outbreak of World War I, he was interned as an enemy with other German nationals. During his internment, he refined his ideas on exercise. He rigged springs to hospital beds, enabling bedridden patients to exercise against resistance, an innovation that led to his later equipment designs.

At Club Pilates grand opening, my husband Todd signed up for an introductory class. The morning of the class, he ran 14 miles. He suggested that I might take his spot at Pilates — he was done with exercise that day. I went, loved it, and have been nearly every day since.

One of the best parts (for me) is that some of the work on the reformer is done lying down. Todd did get to experience that at the grand opening on Aug. 18. 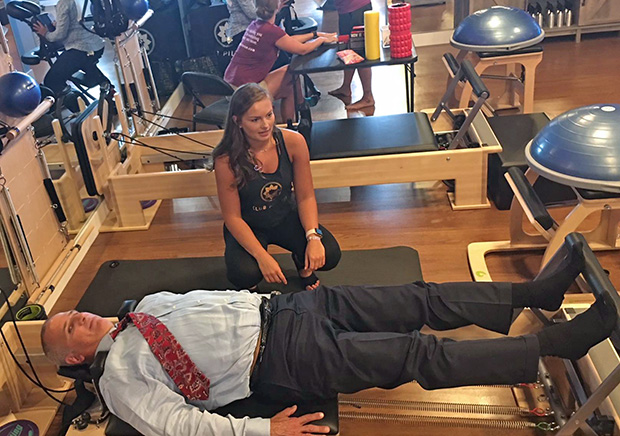 This photo of Todd on the reformer ended up in the magazine offices where we promptly held a caption contest.

“Where should they take the body? Alexander or Ziemer?”

Winner:
“I thought they said ‘Pie and lattes!’”