Strong to the Core

Boutique fitness has not always been a part of the business life for Jeff and Bussie Cox. Owners of the Club Pilates studio located at 111 S. Green River Road, Ste. 1 on Evansville’s East Side, the couple has spent their careers mostly in marketing and advertising.

A graduate of the University of Akron in Ohio, Jeff started his career in advertising with agencies like Ogilvy, worked on the client side for Bombardier business jets, was CEO of rsc/ARS Group (which sold to comScore), and now runs his own marketing and ecommerce consulting company, Cox and Partners. Bussie’s path started with a degree in biology from the University of Transylvania, with the intention of going into the medical field. However, she too found herself in marketing and advertising with Disney and Club Corp.

While in Hilton Head, South Carolina, Jeff and Bussie met working at an advertising agency. The couple moved to Evansville in 2003 —  their two daughters Sullivan (20) and Riley (18) were just toddlers at the time, while Bussie was pregnant with her third child, Caroline (15). The family would expand with two more children in the following years — Marilyn (12) and Robert (9).

Jeff continued with his career in marketing, working for various companies including WPP in New York and eLuxury in Evansville. But in 2017, the idea of owning and operating their own business took root.

“We were looking for something, and franchising always was an opportunity,” says Jeff. “When Bussie happened to come across Club Pilates, it fit very well with her background and passion. And the rest is history really.”

Around Christmas in 2017, the family made the decision to open a Club Pilates studio in Evansville. It was not a decision made without due diligence, however. The family did extensive research into various industries and businesses that could benefit the Evansville community. For Bussie — who has practiced Pilates for 18 years and began privately teaching the exercise 15 years ago — keeping Pilates in her routine always was in the back of her mind. 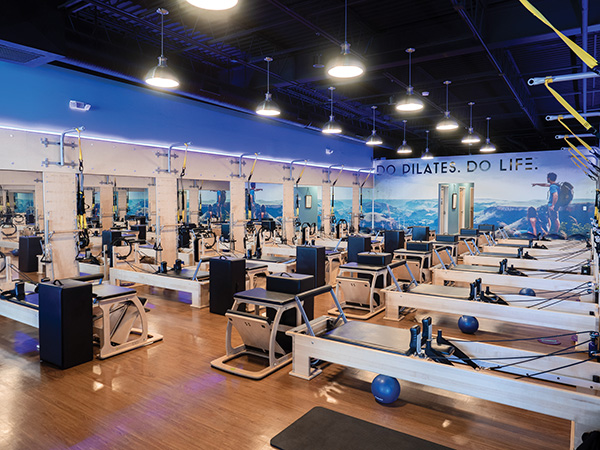 “Everything we were looking at, I kept thinking how can I keep teaching Pilates? How can we fit that into what we might do,” she says. “My biggest fear was someone would bring in what I do in a group setting successfully. When we found Club Pilates, I thought there was no way. And the more I learned, the more I knew this was good.”

“You should have seen her when she learned about it,” says Riley, who works in sales and at the front desk of the studio. “She was so excited.”

Club Pilates is classified as a “boutique fitness” company — the Cox family describe it not like a gym, but a personalized class experience, with small numbers and attentive instructors who focus more on teaching the exercises rather than working out alongside members. These studios include indoor cycling, barre, boxing, and yoga as well as Pilates.

According to the International Health, Racquet & Sportsclub Association (IHRSA) global report for 2019, health club membership reached 183 million users around the world in 2018 and the total revenue generated was an estimated $94 billion. All indicators are pointing to more steady growth over the next 10 years, the report states.

Club Pilates’ structure offers memberships that allow people to come in as many times as they want and explore classes that fit their needs. Signature classes have different options, from balance to cardio, and are offered at various experience levels.

For the Cox family, the research into boutique fitness and Club Pilates did not stop when they first discovered the company. Bussie attended a class at the Club Pilates franchise in Louisville, Kentucky, and marveled at the equipment available to members. Another selling point for her and Jeff was the education provided to instructors.

“It became my mission from the get-go to understand their education,” says Bussie. “I wasn’t going to do it unless I could become a master trainer and knew exactly where the education was coming from.”

And she did just that. While the family worked with the studio’s parent company, Xponential Fitness, on opening the business, Bussie was going through the master training program. She now is certified to teach others on becoming Club Pilates instructors.

“She also sits on the Club Pilates Education board, too,” adds Jeff.

In terms of the actual business, the couple says Club Pilates’ “turn-key” infrastructure made it easy for them to work through the process of starting their franchise. But they also talk about their experience in other fields as helping their success in their first year.

“Bussie used to work for Disney, and they also were a former client of mine — during that time we learned a lot about the customer experience,” says Jeff. “We’ve implemented a lot of what we’ve learned into this business. We try to make the 50 minutes people are here an experience where they can escape, work out, and feel good.”

Part of that included bringing on the right instructors for the Club Pilates environment. Instead of just approaching Pilates instructors in the Evansville area, Bussie and Jeff also went with the tactic of hiring those they felt had good characters that fit their mission.

“We can take good people and train them how to be instructors and in other roles,” says Jeff. “I think that’s made a big difference for us.”

The difference shows. After 18 months, the Evansville Club Pilates reports almost 500 members, ranks No. 2 in its tier in the country, and retail sales numbers are No. 4. The family plans to expand their business by opening another Xponential Fitness studio, Cycle Bar. Work already is underway, with the build out in a space just next door to Club Pilates. Jeff and Bussie plan to open the premium indoor cycling studio in January 2020.

“The phrase you hear a lot from members is that people are addicted,” says Riley. “It’s honestly a little therapy for some people.”

“We have different levels specifically for inclusivity,” adds Sullivan, who is an instructor. “If people walk in and they are in a bad mood or have had a bad day, they always leave in a good mood. People want to be here.”

The successes of the business have translated to more than just membership numbers and sales. For the Cox family, it’s become about having a positive impact on the community.

“Our members are healthier, happier, more active, and better able to impact their environments,” says Jeff. “That is true success.”

And, of course, it is a true family affair.

Sullivan, a student of the University of Evansville studying neuroscience, talks about how it has brought her closer to her parents and siblings, though she moved out on her own in February this year.

“I see them so much. I see them more now than I did when I lived at home,” she says. “And I think we get along better now. I feel like my parents trust me a lot more.”

Entering her first year at Indiana University’s Kelley School of Business, Riley credits the Club Pilates venture with helping her determine the career path she wants to take.

“I sat down with Dad, and we were looking at a year business plan … and I just watched the steps of what would take place. I took a lot from that,” she says.

For Bussie and Jeff, their successes have been compounded with the joy of seeing their children take pride in the business and their family’s endeavors.

“I’ve enjoyed being able to connect with my children as they become adults. I feel really humbled by it all,” says Bussie. “They are proud of us.”

“This probably has been, in my entire career, the most rewarding money-making venture I have been involved in, because you know you’re changing people’s lives,” says Jeff. “You can see it with your eyes.”