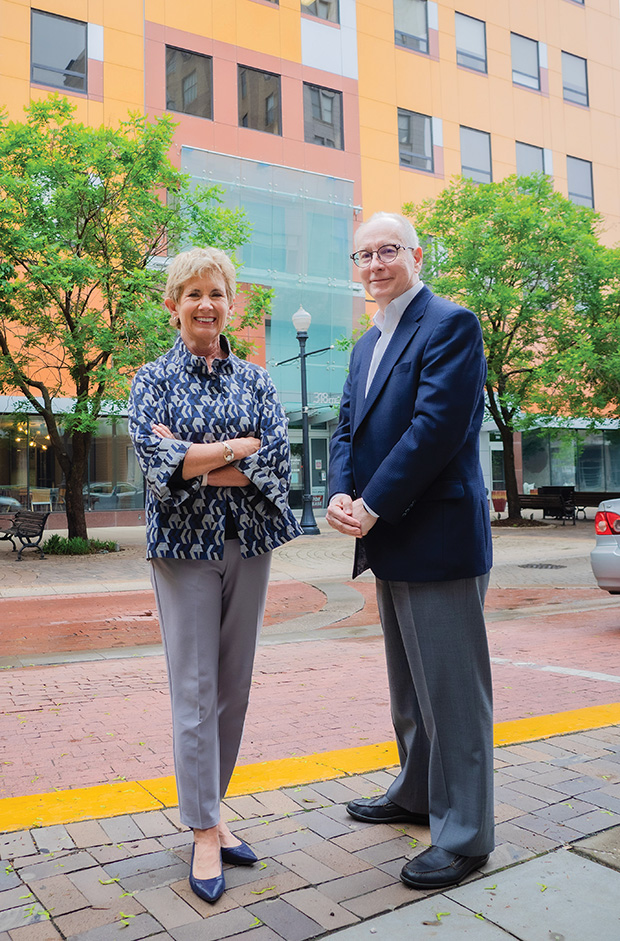 The Economic Development Coalition of Southwest Indiana, Growth Alliance for Greater Evansville, and Southwest Indiana Chamber of Commerce made a major announcement on April 1 of this year. It was no April Fools prank, but the official launch of the Evansville Regional Economic Partnership.

Known as E-REP, the organization operates in and manages Innovation Pointe Downtown and consists of the combined staff, resources, and boards of the Coalition, Growth Alliance, and the Chamber. Serving Vanderburgh, Posey, Warrick, and Gibson counties, E-REP’s goal to foster economic and community growth in the Evansville region is best represented by its name and logo.

“We knew that the word ‘Evansville’ needed to be in there because it’s the name of our Metropolitan Statistical Area, but we want to be very respectful of the fact that it’s not just about the city of Evansville; it is about this whole regional economy,” says co-CEO Tara Barney. “So, long story short, once we set out the name, our existing staff actually created the look and the brand.”

The logo includes the Ohio River running through the “e.” The arrow elements symbolize E-REP’s mission to lift the region up and forward and appear to the trained eye as “EVV,” Evansville’s shortened name and its airport call letters.

While E-REP has an abundance of creative partners in town, it was important for the new team to face its first major endeavor together.

“It was a test for us because we wanted to see how our teams — our marketing teams, because we had different marketing teams — could integrate,” says co-CEO Greg Wathen. “And I think they did a pretty spectacular job.”

For E-REP’s staff of 26 — who all previously worked on separate floors in Innovation Pointe for their respective organizations — the merger was a natural progression. COVID-19 was the spark that finally completed the merging process, but its foundation was laid almost 16 years ago.

In 2006, the Economic Development Coalition was formed to support economic and labor force growth. From its branding, content and language, and services, the coalition pushed a regional mindset as a priority.

Wathen came to Evansville from Perry County, Indiana after getting his start in the industry in Louisville, Kentucky to found the organization and serve as President and CEO. The Tell City, Indiana native says some of Evansville’s most seminal moments show the benefits of a regional focus.

“Think about what’s transpired in the region over time,” he says. “One, with the coalition being created in a regional fashion. Secondly, looking at the Stone Family Center for Health Sciences. It’s the very fact that you have three universities, four health systems partnering together for a regional benefit. And then we saw the power of regionalism through the Regional Cities Initiative, where we landed $42 million and leveraged nearly $1 million of strategic, private and public investment.”

Barney moved to Evansville three years ago from Quad Cities, Illinois to be the President and CEO of the Chamber. The Columbus, Ohio native took on her new role as talk of new alignments were starting to stir again.

It wasn’t until early 2020, just before the pandemic, that the conversations became serious. The emergency response required from all three organizations during lockdown accelerated the need and plausibility of a merger.

“During COVID, it became so apparent to us and our colleagues at the Growth Alliance that the work we were all doing was being deliberately aligned to assist businesses in this community,” says Barney. “It really set in that this is the time to figure it out. Our staffs were working together even more intentionally on unified marketing, how to serve businesses with all kinds of needs, and federal programs were coming at us right and left.”

The process began with charts of each organization’s responsibilities to identify any overlaps in their services and expertise. After months of strategic conversations and input from regional partners including elected officials, area nonprofits, and businesses and groups from the private sector, the organizations approached their boards in fall 2020.

While an ad-hoc committee made up from each board explored the possibility and success of a merger, the President and CEO of the Growth Alliance, Ellen Horan, retired to Houston, Texas.

When the decision was made to move forward with a merger, the boards also decided not to fill Horan’s vacant position, but to merge the three groups under the leadership of the two remaining CEOs — Barney and Wathen.

With the boards’ approval and leadership in place, the staff moved into planning, including creating the brand, governance, and slogan #StrongerTogether.

“Having a singular voice is nice, having a regional voice is so much more powerful,” adds Wathen. “We don’t always fully recognize lots of other regions across the country are looking at these same opportunities and they’re not always afforded. The reality is we’re pretty homogenous from that standpoint.”

The merger can seem like an intimidating change for the partners and constituents who work closely with E-REP, but both Barney and Wathen say the changes will only be beneficial.

E-REP will maintain its core principles and services, including providing tangible economic and community development for its public and private partners. In the past, they’ve helped secure more than $80 million (not including $42 million from the Regional Cities Initiative) for the community to build capacity.

The biggest external change from the merger will be an easier access of information and resources for clients and constituents. Internally, the merger not only gives the E-REP staff new career paths, but also new roles.

Barney says marketing will be a key project. Focusing on deliberate digital messaging and an increased web presence will help E-REP meet new goals and be the first point of contact for potential partners.

The co-CEOs also are looking to the future on top of these other goals. E-REP plans to begin expanding its reach into the downtowns of Henderson, Kentucky, Mount Vernon, Indiana, and Princeton, Indiana.

In the short time since its launch, E-REP’s transition has ultimately been successful. But Barney and Wathen don’t expect this exact version of the organization to be the final one.

“It’ll probably evolve over time. Everyone was quick to say, ‘we’ve got to start somewhere so let’s start here,’” says Barney. “‘Let’s recognize that here may need to be fine-tuned over time.’”

“It’s not our role to drive everything,” adds Wathen. “Our role is to be engaged and influence the direction that the region goes. We have very specific metrics that we want to achieve, but you do this in partnership. That’s the only way to make it work.”