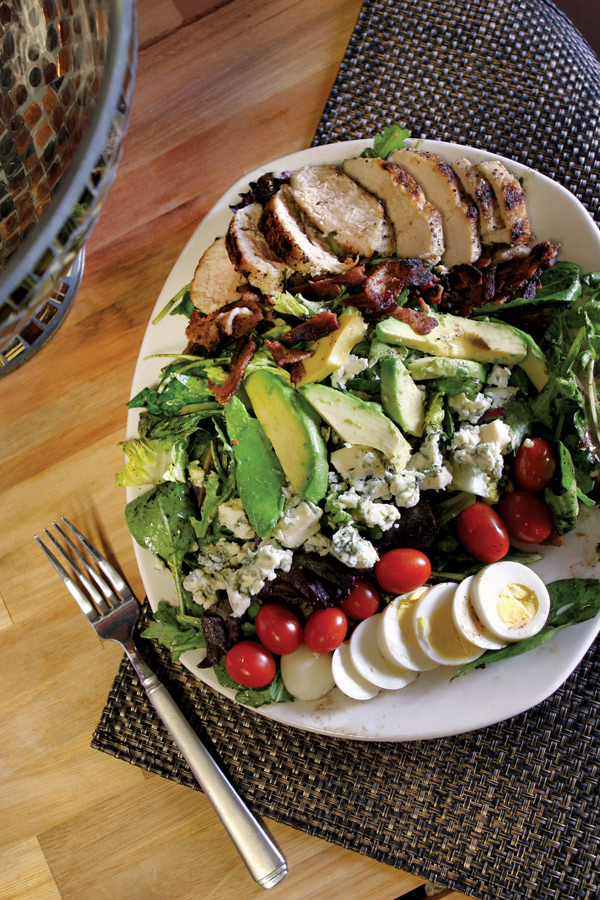 An 80-year-old salad … sounds appetizing, right? With so many things changing in the culinary arena over the last 30 years or so, and especially the last 10 to 15 years, belief should be suspended that something so traditional can stand the test of time. But the Cobb salad has done just that, undergoing minimal changes through the years. Finding its origins in the early 1930s at the Hollywood Brown Derby, the salad is the namesake and major legacy of the former owner Robert Cobb.

The versatility of this salad and the fact that it is substantial enough to be a meal, suggests that it can be catered to a wide spectrum of palates. This salad also lends itself to many variations based on which protein and cheese combination you choose to go with. I chose to go with the traditional recipe for its beauty of presentation and diversity of flavors. My favorite style, however, is to change the bleu cheese and chicken out for feta and fresh grilled salmon.

For this recipe, the chronology of steps progressively builds upon each level of flavor to create fabulous complexity.

Directions:
Begin by cooking the bacon in a medium skillet until cooked to your liking. Set aside. Drain all but 1-2 ounces of remaining grease. Add ¼ cup olive oil, raising heat to high. Brown chicken on both sides. If working with a thick breast, finish cooking by baking in a 350-degree oven for approx. 10 min. Turn heat off but leave skillet on hot burner. CAREFULLY add both vinegars to your skillet. Mixture will bubble heavily and quickly come to a boil. Use a rubber spatula to scrape all of the brown bits (lots of flavor!). Add olive oil and mustard whisking together until fully incorporated. Toss greens with enough dressing to coat, but not smother/drown them.

Give a rough chop to your finished chicken, bacon, egg, and veggies, and serve atop mixed greens with crumbled bleu cheese.

If using salmon and feta instead, no need to cook salmon in the same pan as the bacon, simply season with salt and pepper and cook until done, but be careful to not overcook (tends to become dried out very quickly). Enjoy!