Mattie Miller grew up in Adams, Tennessee, and moved to Evansville when she married her husband William Miller in 1953. Her first teaching job was at Lincoln High School. In 1962, she began teaching at Harper Elementary School as the school’s first African-American teacher before schools had been desegregated. Almost 40 years later after holding several positions within the Evansville Vanderburgh School Corporation, she retired from Harper as the school’s principal. The elementary school’s auditorium is named after Miller, and she was inducted into the EVSC Hall of Fame in 2010.

I am from Tennessee. A little town that had 500 people. I met my husband [William Miller] at Tuskegee [University in Tuskegee, Alabama]. Both of us were work students. I say work students — I mean we had to work our way through school, because if they gave scholarships, we didn’t get any. My high school teacher wanted me to go to Tuskegee.

I got a job here in Evansville teaching when I was 21 at Lincoln High School. See, Lincoln was an all black school. It closed in 1962. [Lincoln High School was changed from a high school to a kindergarten through eighth grade school in 1962]. That’s how I got to Harper Elementary School. Harper School was where they sent me as the first black teacher. I was told by the central office administration — at the time, see, blacks used to be called Negroes — if I failed, they would never hire another Negro teacher. 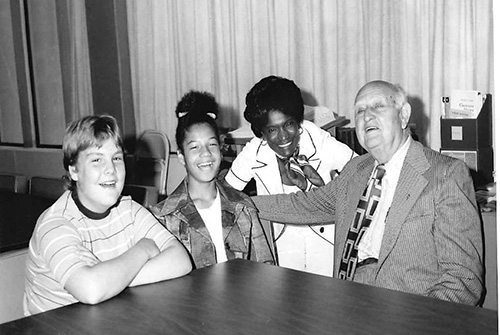 Yeah, I was scared. I cried. When I first came to Harper, I sat outside with my husband, and I cried because I was scared. I wasn’t afraid of teaching so much. I was afraid of how people would treat me and receive me. I was the only black face there. But I just focused on teaching and treating the kids how I would want to be treated if I were a student. That’s what I focused on. I guess that’s what helped me to survive. It must have. The students were really receptive, and I didn’t have any problems with the students.

Evansville, it was OK, but it wasn’t what I thought it was. My husband, when we were in college, he told me all these good things. But he didn’t tell me about the bad things. See, we couldn’t even go to the movies, because that was before the civil rights laws were passed. You could go to the theater, but you had to sit up in the balcony.

I didn’t get black students until 1972. [In 1972 by federal mandate, the Evansville Vanderburgh School Corporation began desegregating schools.] I was there a long time without black students.

I got my counselor’s license going to school at night, and they told me they needed a freshman counselor at F.J. Reitz High School. They said, “We’re going to send you out there.” And I said, “No, I don’t want to go to Reitz.” West Side — I said nope. They said, “Well if you don’t go to Reitz, you won’t have a job.” That was 1975, and I stayed until 1985. I stayed 10 years after not wanting to go there.

I retired from Harper 20 years ago. I didn’t teach after I left Reitz. I went to Plaza Park as assistant principal after Reitz. Then, I became principal at Harper.

If it hadn’t had been for a teacher, I would not have been a teacher. Somebody took me and mentored me, and I still want to do that same kind of thing to help students. The story of my life is so different from most people here, but I feel very blessed I have been able to work and get most of the things I thought I wanted.