After auditioning for the role of music director with the Evansville Philharmonic Orchestra, Maestro Alfred Savia felt like everything fell into place. He still can remember the entire repertoire for his audition concert.

“It’s one of those ones you say, ‘Yeah, everything clicked. If they don’t offer me this job, I don’t know which job I’m going to win as music director,’” says Savia.

Now, after 31 years as music director for the Evansville Philharmonic Orchestra, Savia has decided it is time to say goodbye. Next year, he will become the artistic advisor for the Indianapolis Opera and leave the EPO as conductor laureate. During Savia’s time with the organization, the EPO made the Victory Theatre its home from the Vanderburgh Auditorium (now the Old National Events Plaza), played in venues across the region, and brought music of all genres and periods to the audience.

Opera has been one of Savia’s great passions and a tradition he began with the EPO as early as his second season with a production of “La Boehme.” The long crescendo of opera performances will end with a dramatic and theatrical performance of Giacomo Puccini’s final opera, “Turandot,” which will be Savia’s final concert as music director.

Aside from the venue change to the Victory Theatre in 1998, what other changes has the orchestra experienced during your tenure?

Along the way, we’ve tried to do more and more concerts that are not just in the concert hall. For example, we’ve been doing, since I think my second or third season here, “Messiah.” Nearly all of them have been done at Trinity United Methodist Church Downtown. Then we’ve expanded the “Messiah” to include a performance at St. Joseph Catholic Church in Jasper, Indiana.

We’ve played many concerts at Lincoln Amphitheatre, which is a wonderful outdoor theater. Lincoln Amphitheatre is one of the few outdoor venues we don’t need to amplify the orchestra — the acoustics are that good — so we’ve had a big tradition of playing there. We’ve done quite a few concerts in New Harmony, earlier on at the Roofless Church. I’d say nearly every year since the Rapp-Owen Granary was opened we’ve played concerts there.

It’s wonderful to have a concert hall like the Victory to tell people this is where to come, but we also need to be bringing people in from other areas. 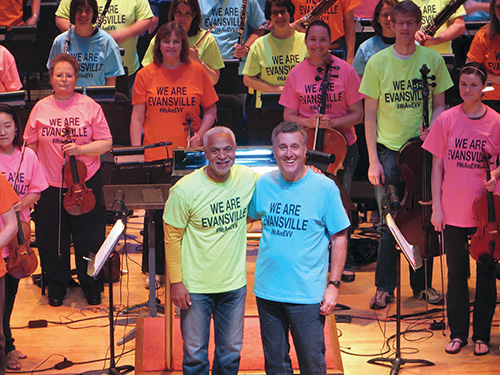 What have been some of the most memorable performances you’ve conducted?
One of the concerts I’m going to be doing this year on the pops series (Feb. 16, 2020), that had become a mainstay as a standalone concert for actually seven years straight, is our gospel concert. We’re trying to really pay homage to that art form of gospel music, which is a truly American art form where we’ve had extensive collaboration with the African-American church community together with Philharmonic Chorus members.

I wanted to do that as part of my last season because someone like Chris Harp (the director of marketing and special events for the EPO), who sings in our Philharmonic Chorus, would’ve probably never been best friends with someone like (local singer and performer) Gina Moore. I think doing the gospel concert brought a lot of people together. I hope that’s something the orchestra will continue to do after my tenure ends here.

That very first gospel night stands out in many, many ways as one of the most intense and viscerally exciting things, because it was a new thing. It was culturally something so different, and there was just so much electricity in the air that the roof was almost blown off.

How would you describe your music style?
It’s my job to take those notes and the orchestra and then be essentially the advocate of the composer. I probably do that a little more literally than some other conductors.

Beyond that, I think two of my idols growing up as a conductor couldn’t be more disparate. One was Arturo Toscanini, the conductor of the NBC Symphony and the great, great Italian conductor with a prodigious memory and ear who was at that time one of the most literal to the score of the conductors alive. On the other hand, there was Leonard Bernstein, who I actually knew. I conducted for Bernstein, and he helped me get into Tanglewood (the music center in Lenox, Massachusetts, that serves as the summer home of the Boston Symphony Orchestra). I grew up in the New York metropolitan area when Bernstein was music director of the New York Philharmonic, and he had a very flamboyant style — very opposite to Toscanini.

I’d like to think I take a little from both. I think I take more of Toscanini’s literal approach to the score than Bernstein did, but my conducting style I think leans a little more toward [Bernstein] in physicality. 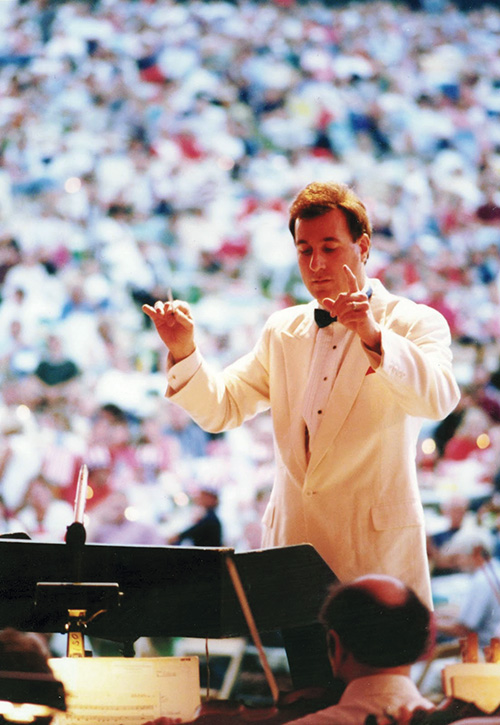 How much have you had the opportunity to conduct outside of the EPO?
I’ve done a lot of conducting in South America. I’ve done three concerts in Montevideo, [Uruguay,] with the orchestra. I’ve conducted in Quito with the orchestra in Ecuador; Santiago, Chile; two orchestras in Mexico; and then I’ve done a few concerts and opera in Italy as well.

And you are in no way slowing down it seems?
Well, maybe slowing down a little bit. My wife (Kathryn “Kitty” Savia, a violinist with the EPO who first played with the orchestra as a senior in high school and rejoined during Alfred’s first season in 1989) and I really enjoy traveling.

What are your thoughts going into your final performance on April 25, 2020?
Well, my big thoughts are, first of all, I have to learn the opera. I have not conducted “Turandot.” It’s an opera I’ve played in the pit, I’ve heard, and I’m very familiar with by ear, but that’s very different than really learning it and leading the production. I will be burning the midnight oil many hours. You sort of torture yourself to get to that point, and then it’s like OK now is the time. But that’s what we do as musicians.