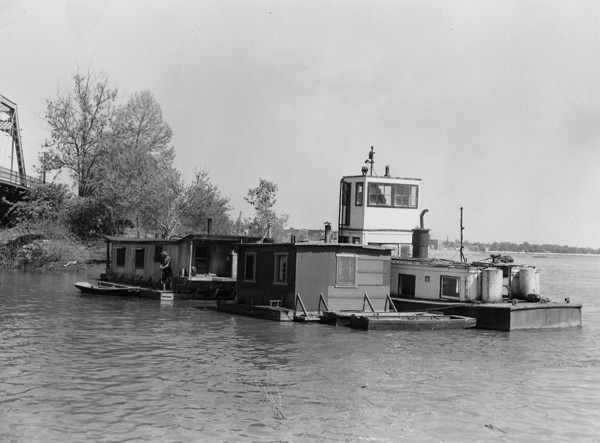 For the people of Pigeon Creek, April 30, 1957, was moving day. Almost all the houseboats on the creek were gathered at the Trockman salvage yard near the mouth of the creek where a Ferris Traylor towboat waited. Several weeks earlier, the City of Evansville had served eviction notices to the residents of houseboats and shacks along the creek ordering them to vacate the premises by May 1.

During the latter half of the 19th century, houseboats began to appear on the Evansville riverfront. Although boats could be found anywhere along the river, many congregated in Pigeon Creek south of Franklin Street, which offered a relatively safe anchorage. The houseboats came in all shapes and sizes, some permanently beached. In addition to houseboats, many others built shacks along the creek bank. Throughout the existence of the Pigeon Creek neighborhood, public opinion often was divided. For some, the residents were looked upon as free spirits, with little responsibility and few worries of a rapidly changing society. Others saw the residents as lazy, largely on some form of public relief, and living in squalid conditions resulting in widespread illness. Early in the 20th century several attempts were made to force them out of the creek, but the houseboats always returned.

On April 30, the relocation, dubbed “Operation Houseboat,” moved the boats out of the creek and across to the Kentucky side of the river. Residents of shacks along the creek and boats which were too flimsy, had their belongings packed on trucks and were taken to new homes to live away from the creek. But one houseboat still remained on Pigeon Creek. On May 4, the last houseboat, its owner unknown, finally left Pigeon Creek. A week later when city firemen burned the abandoned shacks and boats, an Evansville neighborhood, which had existed for more than 75 years, disappeared.