Columbus, Indiana, is among my favorite cities in the world. Inhabited by thinkers and doers even before it became a company town in 1919 with the founding of Cummins, Columbus is known as an architectural mecca. In the mid-1950s, the Cummins Foundation began paying design fees for public projects designed by highly regarded architects, an effort led by Cummins Chairman J. Irwin Miller to improve quality of life in the town.

The New York Times architecture critic Paul Goldberger wrote in 1976, “Columbus, Indiana, and J. Irwin Miller are almost holy words in architectural circles. There is no other place in which a single philanthropist has placed so much faith in architecture as a means to civic improvement.”

As the years passed, Columbus came to have a newspaper building designed by Skidmore, Owings & Merrill; a library designed by I.M. Pei; churches designed by Eero Saarinen and his father, Eliel; a Kevin Roche post office, and a Cesar Pelli shopping area.

Years before the home of J. Irwin and his wife Xenia Miller opened to the public in May 2011, my husband and I spotted it along Columbus’ Washington Avenue. In 1953, the Millers commissioned Eero Saarinen, the Finnish-American architect whose father Eliel had designed First Christian Church in Columbus (one of the first churches in the U.S. to be built in a modernist style), to design a new home for their growing family. In 1947 Eero Saarinen designed the Gateway Arch. 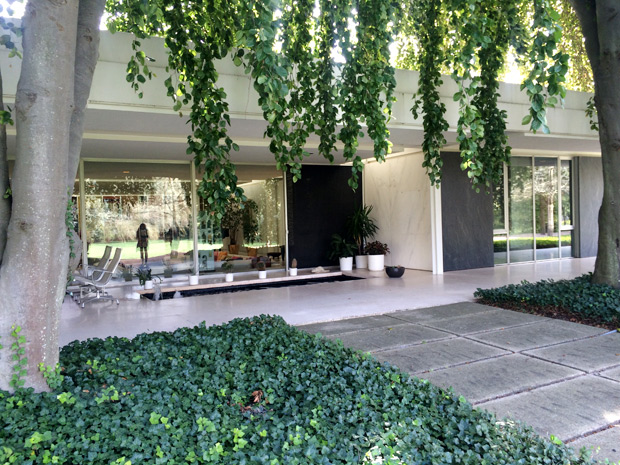 ▲ The dining room opens up to this view, with a reflection pool.

▲ The conversation pit in the living room is one of the defining design elements of the Miller House.

J. Irwin died in 2004; Xenia died in 2007. The family agreed to donate the home and gardens to the Indianapolis Museum of Art. Today, twice-daily tours (Tuesday-Saturday, in small groups) are offered by the Columbus Area Visitors Center.

The Miller House and Garden is regarded as one of the five most significant mid-century Modernist residences in the U.S. Joining Saarinen’s creative team on the home were Alexander Girard, who brought strong colors and playful patterns into the modern aesthetic, and landscape designer Dan Kiley, a leading figure in modern American landscape architecture who employed the Miller home landscape’s grandest feature, a gorgeous allée of honey locust trees.

▲ The Miller House is sited on 13 acres. While the home is located in a residential area on Washington Street in Columbus, Indiana, it’s view from the back sweeps down to the Flat Rock River.

Tours have sold out months in advance – visit the IMA website before you go and book in advance. When I visited recently, the Visitors Center was planning special holiday tours – opportunities to visit the Miller House glowing at night.