The Least Amount of Damage 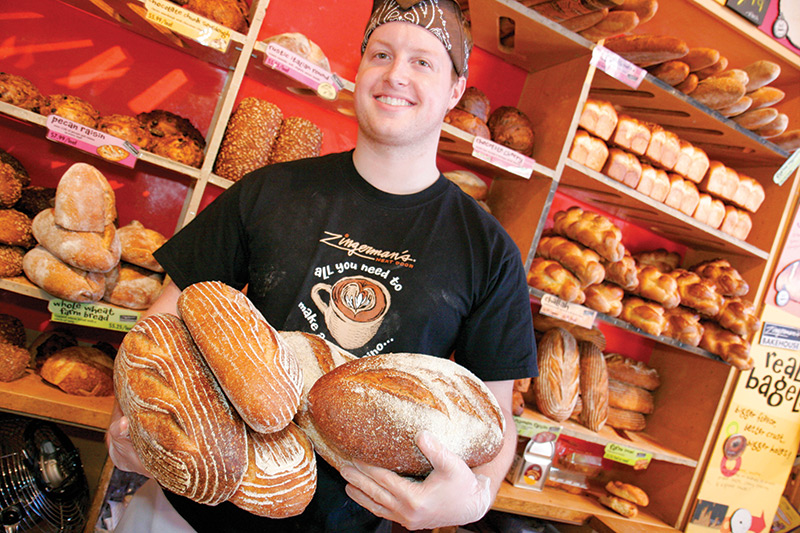 In Ann Arbor, Mich., Zingerman’s is a food institution. It rocks the culinary world with divine treats from an assortment of gourmet food businesses: paesano bread (great for dipping in olive oil) from Zingerman’s Bakehouse, a bacon chocolate pig (a hog-shaped milk chocolate studded with applewood-smoked bacon) from Zingerman’s Deli, or a Detroit street brick (made from goat milk) from Zingerman’s Creamery.

This family of food-related companies has received an impressive amount of national praise. “The coolest small company in America” is a line from Inc. magazine. “One of 25 of the world’s best food markets” claimed Food & Wine magazine. “The deli of my dreams” from the late R.W. Apple in The New York Times.

The multimillion-dollar company has a dedicated following addicted to local food dependent on the seasons. What is less well known about Zingerman’s: It’s a life-changing experience.

I remember my Zingerman’s experience fleetingly, like a dream. The nerves on my hands, still smarting from dunking them in water well past boiling, complained to my brain: “That hurts.” But John Loomis, founder of Zingerman’s Creamery, was talking about the craft of cheese making. His instruction came during Zingerman’s cheese-making class, held every Saturday. I was taking notes, so I could later describe to readers the joys and pains of cheese making. And then, Loomis said, “The best cheese-makers do the least amount of damage.” I felt like the world should stop and the room filled with ardent cheese students should consider the gravity of Loomis’ words. It paralleled an important lesson: Let life happen with the least amount of damage, and life will happen much better.

It’s an abstract notion, but that’s what a trip to Ann Arbor can do to you. The city is awash in artists and thinkers. From a passionate local food movement to powerful theater performances, Ann Arbor is no trip to the beach. The city challenges and energizes you.

Amish free-range chicken dipped in buttermilk and fried to crisp perfection and the hand-pulled pork pit-smoked on oak wood for 14 hours are two options on the Zingerman’s Roadhouse menu shining with local ingredients used for Southern cuisine. Head chef and managing partner Alex Young finds those dishes most interesting, he says. Young, born in England and raised in California, has had a career that’s taken him throughout the country until he relocated to Ann Arbor to stay close with his wife’s family, who has been in the area since 1823. Besides the menu, the restaurant, built in 2003, has a Southern feel, too, due to reused architectural elements. The floor, for example, is made from the white oak timbers of a former 1830 farmhouse once one mile from the restaurant’s current location.

Downtown, another restaurant is big on reusing building materials. Conor O’Neill’s is a pub and restaurant big on Irish authenticity. The restaurant’s dark woods come from bars in Ireland, Irish workers laid the stone floors, and Irish natives are on staff.

It’s one of 45 restaurants around Ann Arbor’s Main Street area, and as much media coverage has been given to Michigan’s declining population, according to the 2010 census, you’d never know it on a weekend night on Main Street. The restaurants are packed and the outdoor patios are full of patrons enjoying the cool Michigan summer evenings.

If there isn’t outdoor seating, that doesn’t mean the interior ambiance isn’t worth it. Mercy’s is an upscale place where fancy cocktails seem like a necessity, not a luxury. The lemon meringue pie martini, made with Absolut Citron and served in a glass rimmed with graham cracker crust crumbles, may have a fun name, but the alcohol is powerful. The food matches the drink menu with carefully prepared dishes including the Burmese coconut chicken soup.

Another restaurant with an impressive menu: Jolly Pumpkin Café & Brewery, loaded with an assortment of craft-brewed goodies such as the naturally cloudy and dry Bam Biere with a strong sour smell, the malty and smooth Siren Amber Ale, and the Golden Manatee Belipago with flavors of chestnut, tapioca, sorghum, and agave nectar.

The University of Michigan is one reason why Ann Arbor boasts such a burgeoning arts scene. UM professor Francis W. Kelsey’s efforts at archaeological sites from the 1890s to the 1920s led to the Kelsey Museum of Archaeology in 1928. Today, his namesake museum holds items from ancient history, but a couple of the oldest pieces are two mummies. One has six fingers on one hand.

Ann Arbor offers more than a handful of learning experiences. The Exhibit Museum of Natural History houses academic fields such as anthropology, zoology, and paleontology. The 70,000 visitors a year aren’t strolling through a complex college textbook, though. On the second floor, for example, are gigantic displays of dinosaur skeletons hung from the ceiling.

You’ll move from fossils to paintings when you head over to the Ann Arbor Art Center. More than a century old, the arts center comes alive with vibrant pieces from Michigan-based artists. More culture? Nearby Chelsea, Mich., overflows with it, thanks in part to a nationally renowned theater scene led by Hollywood icon Jeff Daniels, a native. He opened the Purple Rose Theatre 20 years ago with a $200,000 budget. Now, it’s grown to $2 million a year. For 43 weeks a year, you can catch shows here — you and 40,000 other patrons who want to see professional Midwest actors at their best.

The best is exactly what to demand from Ann Arbor, and should it move you like it moved me, Ann Arbor will demand the best from you.