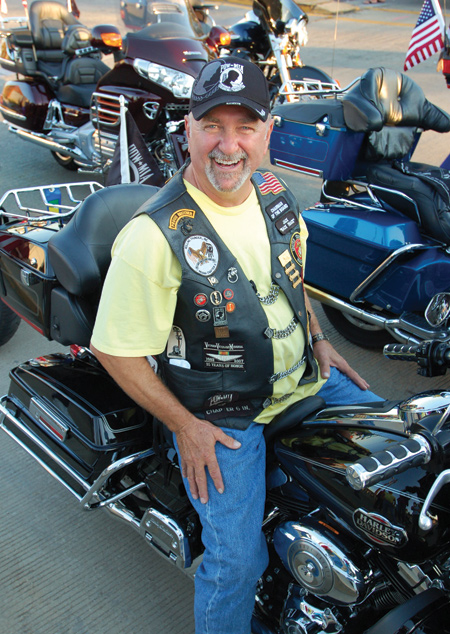 On the right side of his vest is one of the most important patches Jack Miller wears: an eagle, wings outstretched as if descending upon prey. In its claws is a banner that reads, “All Gave Some, Some Gave All.” He’s one of 171 who wear this patch on their black, biker-style vest that represents Evansville’s Rolling Thunder, a national organization that educates the public on the prisoner of war/missing in action issues.

After a short time in the Marine Corp as a young man, Miller found Rolling Thunder as another way to serve American soldiers, especially those who never made it home. When he retired from Alcoa, an aluminum manufacturer in Newburgh, Ind., after 35 years, he dedicated his life to remembering the soldiers of all wars. What’s most important, says Miller, is not letting the world forget about the brothers, sisters, moms, dads, and friends who gave up their freedoms. The soldiers he refers to are the more than 92,000 from past wars that were never found after going missing in action or taken prisoner. According to statistics gathered by Rolling Thunder, more than 78,000 are from WWII alone. “When I think about that,” Miller says, “I think about 78,000 families that never got closure.”

That number rises when considering the homeless veterans still enduring the ramifications of war. From the Vietnam War to Desert Storm to the current wars in the Middle East, Rolling Thunder helps these veterans. Each year, the team hosts three cookouts for the vets, as well as a sit-down Christmas dinner each December that serves 30-plus veterans. The veterans also receive clothes, backpacks, and more food. “It makes my heart feel good to have them with their bellies full,” says Miller.

Rolling Thunder also aids in funding a shelter at the Lucas Place II apartment complex being constructed by ECHO Housing Corporation, a non-profit agency housing the homeless. The three-story facility, expected to open in early November, will provide housing specifically for disabled homeless veterans. Rolling Thunder has opted to donate $4,000 to this cause — enough to furnish two of the 27 units in the complex. “We want to show them that somebody cares,” says Miller. “We want to show them that we do.”