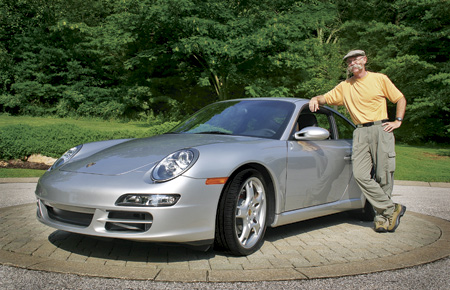 When the editors of Evansville Living called seeking expertise from a car guy, I couldn’t say no, especially when I found out the task: Test drive a 2006 Porsche 997 Carrera S, from the classic German carmaker. Tony Ricketts at D-Patrick European Imports sent out a car and I took it for a spin.

The Scoop.
Since its debut in 1964, the Porsche 911 has been a respected, if not revered sports car. Like its predecessor, the 356, it was a rear-engine design but its styling was a little less reminiscent of an inverted bathtub on wheels. They were fast, but also notorious for being a little twitchy and tail-happy in their handling as a function of the weight of the engine hanging off the back of the car. It’s often been said jokingly that the Porsche is a testament to German engineers that they can take a bad design and make it work, but make it work they did. And while it’s been over 40 years since the Porsche 911 was launched, it remains one of the standards by which other sports cars are judged, and the latest version is the best one yet.

The 2006 Carrera S represents the 997-generation of Porsche’s venerable 911 model. The Carrera S is right in the middle of the 997 line-up. It sports the traditional flat six-cylinder engine, but the Carrera S gets a slightly larger 3.8 liter version, boasting 355 horsepower. It’s zero-to-60 mph time is about 4.5 seconds; zero-to-100 mph can be accomplished in under 11 seconds. Top speed is in excess of 170 mph. Impressive stats, but all things you might expect from a car with a price tag of $90,975.

The Verdict.
The Carrera S delivers in all categories. It’s as impressive on the road as it is on paper. This car is an absolute blast to drive. Gone are the handling quirks of the earlier generations of the 911. No matter what I did (and I did a lot), I could not get the rear end to break loose in a curve. In fact, going through a particularly tight S-curve on a country road in northern Vander-burgh County, I had to back down because I was running out of talent much faster than the Carrera S was running out of capability. The clutch is effortless and the short-throw six-speed shifter can comfortably be operated with almost a flick of the wrist. Porsche has never forgotten its racing roots though, and the pedal geometry is perfect for aggressive heel-toe downshifting.

Interior ergonomics have always been good in 911s, although aesthetics were historically lacking. However, in the new Carrera S, both of these have taken a big step up. The leather seats are inviting and hold you in a perfect driving position. Visibility in the car is fantastic and everything you need is at your fingertips. However, to say that Porsches have never been known for a flashy dash would be an understatement. They have always taken more of a “Just the facts, ma’am” approach. However, while the dash of the Carrera S is still “all business” the finishes and textures are much more commensurate with a car in this price range.

Bottom Line:
Porsche 911s have the reputation of being virtually bulletproof. They are race-bred, but are probably the most capable of doubling as a daily-driver of any super car. The new Carrera S represents the best of both worlds. Tony Ricketts at D-Patrick will tell you: All you need is to be able to afford one. And let me tell you, this car has me questioning whether my kids really need those college educations after all.