The Show Goes On

The University of Evansville’s theatre program stages its pandemic comeback

The University of Evansville’s nationally acclaimed theatre program typically auditions 2,000 students each year and stages up to six productions — generating 34 performances — annually. Like with most things, the COVID-19 pandemic left a scar; UE theatre’s 2020 audition rate dropped to 700 students, and the program was forced to cancel some performances and stream others. The industry ground to a halt virtually overnight, jeopardizing the students’ future careers.

However, if there’s one thing the UE theatre program knows, it’s how to keep the show going. Forging ahead with innovative adjustments and renewed vigor, the program is preparing for a full season onstage in front of an audience.

“It’s OK that we will have rebuilding years,” says Sharla Cowden, the theatre department’s chair and managing director.

One step in the rebuild is tempering the number of annual productions. Shanklin Theatre will host three productions instead of four, while May Studio will hold two rather than three.

Alumni also form a strong backbone of networking. Wes Grantom, a 2003 graduate, teaches directing at UE but still directs professionally. While directing an off-Broadway show, he met burlesque artist Tansy, whom Grantom invited to Evansville as a consultant to choreographer — and guest artist from New York City — Chad Goodridge for the 2022-23 production of “Cabaret.” Tansy and the UE theatre program staged an evening of two burlesque performances at Mo’s House to promote the show and draw local attention to the art of burlesque. Alum Jacob Climber, a costume and scenic designer for operas, also serves as a guest artist in residence for “Cabaret” and mentors the student costume designer. 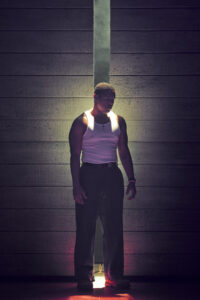 The theatre program also is adapting its curriculum. For example, Cowden says professor and 2003 graduate Amelia Mc- Clain is teaching revised techniques, such as auditioning over a video call to meet post-pandemic realities.

“We want to have a community of generous theatre artists who can produce plays relevant to our times and our community and play a part in our national dialogue,” Cowden says.

The University of Evansville’s theatre program next takes the stage in “Cabaret” on Nov. 11-12 and Nov. 17-20 at Shanklin Theatre.