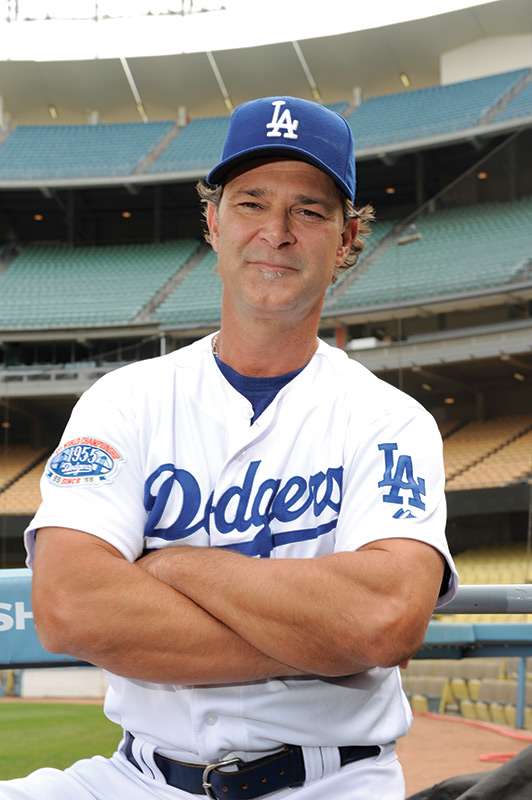 Numbers tell a story in baseball. Casual fans might know the value of a 20-game winner or the importance of a .300 hitter. Mention figures like 56 or 511 to hardcore aficionados, and you’ll probably get an earful about Joe DiMaggio’s hitting streak and Cy Young’s career victory total. Sometimes, a subtler tale lies behind a number, a story that gets as much notice as a single leaf among bright autumn foliage.

Since coming to Los Angeles in 2008, Dodgers hitting coach Don Mattingly — who will succeed Joe Torre as manager when the Major League Baseball season begins in April — has worn number 8. But during his years as a star first baseman for the New York Yankees, “Donnie Baseball” wore number 23. Mattingly’s reason for picking that number is rooted in tragedy and family love.

When he suited up in his first sports uniform in March 1964, Don wasn’t quite 3 years old. His older brother Jerry had helped Rex Mundi High School, a former Evansville Catholic school, to the final four of the state basketball championships. Jerry, a 6-foot-2, 195-pound senior, was a major contributor to the team’s 26-3 record.

The late Bill Mattingly, Don’s father, once said the future American League Most Valuable Player “was sort of a mascot for that state finals basketball team. He was just a little guy, always hanging around practice. For the tournament, he wore a kind of homemade outfit with a Rex Mundi school letter on the shirt and a pair of little white shorts.”

Jerry earned 11 letters in three sports in high school. A receiver on the football team, he was a favorite target for Bob Griese, the future quarterback for Purdue University and the Miami Dolphins. A local newspaper reported that Jerry had “unfurled some of the most spectacular performances ever seen on Evansville gridirons.”

An infielder-outfielder in baseball, Jerry teamed with Griese in 1963 to lead their American Legion team to the national tournament. Jerry’s .413 average won the tourney batting title. “There was a big marble plaque in our basement,” recalls Don, “a plaque Jerry won for leading the tournament in hitting that year. We had a small house, and I spent most of my time down in that basement. I remember seeing that plaque all the time. It was kind of heavy — something you don’t forget.”

Jerry turned down several scholarships from major football powers to accept a basketball offer from Evansville College. He earned three varsity basketball letters with the Purple Aces and played baseball for three seasons. In 1965, Jerry’s freshman year, Evansville won the NCAA college division basketball title. He worked his way into the starting lineup as a junior. “Strong rebounder despite his 6-2 height,” says Jerry’s 1967-1968 player sketch. “Probable starter with quick moves. Jerry is in excellent shape and has the desire and ability to make the difference in a close game.” As a senior, Jerry scored 281 points in 28 games to help Evansville reach the NCAA college division quarterfinals.

Jerry spent a fifth year at Evansville and earned a degree in education in 1969. After graduation, he landed a recreation director’s position at an Evansville preparatory school. The job was due to start in the fall, and Arad McCutchan, Jerry’s college basketball coach, wanted him to work at McCutchan’s summer camp. But Jerry decided on a construction job that offered higher pay.

Shortly after 8 a.m. on Aug. 18, 1969, Jerry was working on a highway construction project near the Southwest Indiana town of Griffin. According to contemporary accounts, Jerry was next to the front of an asphalt spreader when his right foot got caught in a wheel. He was thrown backwards onto the pavement and apparently knocked unconscious. Unable to see Jerry’s prostrate form, the driver kept moving the black-topping device forward. Before a foreman saw what had happened, a wheel rolled over Jerry and crushed his chest. The coroner’s report said he died of head and internal injuries.

Jerry was only four weeks past his 23rd birthday, and he left behind a widow and two small children. Also surviving were his parents, Bill and Mary, a sister, and four brothers. Eight-year-old Don was too young to understand the depths of the trauma. “The guy who owned the construction company came to the house to tell my parents,” Don says. “I remember my mom and dad sending me outside, and I remember being out in the backyard with a bat, trying to impress that guy with my swing.”[pagebreak]

Among the family was the only Mattingly daughter, Judie Ann Turner, and in time, the other Mattingly boys followed Jerry’s example, blossoming into exceptional athletes. “Randy was five years older than Michael,” says Don, “and Michael was five years older than me. We played wiffle ball, basketball, football, and everything else in the backyard and down the street. Me and Michael were at odds pretty good. We’d fight all the time.”

Born five years after Jerry, Randy became a star quarterback for Evansville College. He was the Cleveland Browns’ fourth-round pick in 1973 and finished his career in the Canadian Football League. Michael went on to star in baseball and basketball at the University of Southern Indiana.

Don also carved a reputation in sports for himself. At age 13, he traveled to Colorado for the national junior Olympic basketball championships. At Evansville’s Memorial High School, he was a guard on the basketball team and played quarterback and defensive back for the football squad.

Don’s best sport was baseball, and he was a pitcher and first baseman for his high school team. In Don’s junior year, Memorial went undefeated and won the state title in 1978. The school’s 59-game win streak ended a year later in the state championship game. Over his four years at Memorial, Mattingly compiled a .462 batting average and earned an award for scholarship, leadership, and athletic ability.

The New York Yankees selected Don in the 19th round of the 1979 draft. He was assigned number 62 at his first spring training camp. A year later, he wore number 46. He played his first game for the Yankees in 1982, and in 1983, when he became New York’s regular first baseman, Don requested uniform number 23. “I was turning 23 that year, and my brother Jerry was 23 when he passed away,” says Don, “so it felt like the right number for me.”

Don went on to become one of the Yankees’ finest first baseman. He retired in 1995 with a career .307 batting average, nine Gold Gloves, and the 1985 American League’s Most Valuable Player trophy.

“When I came up, Lou Piniella, Rich Gossage, Bobby Murcer, Willie Randolph, Graig Nettles — all those guys were there and they took me under their wing,” says Don. “They took care of me and showed me how to play. Over time, you realize that when kids come up, you take care of them and make sure they do things right. You pass along some of the knowledge you got from playing in New York.”

The season after Don’s retirement, New York right fielder Paul O’Neill maintained that Don’s professional conduct had left its imprint on the Yankees. “This is still Don Mattingly’s team,” O’Neill told then ESPN columnist Peter Gammons. “Almost all the young players here learned the way to work and act from Mattingly, and it’s carried over. I don’t know how many more years it will last, but for now, Don Mattingly is still the captain of this team.” That 1996 season the Yanks went on to win the World Series. “Mattingly’s team” would go on to win three consecutive titles from 1998-2000.

No one would have been prouder than Jerry, whose work ethic, athletic skill, and personal character had set a solid example for a kid brother. “He was a big part of it,” says Don. “Evansville’s a blue-collar town. When you come from that part of the country, you work hard at everything you do. You work hard, and you play hard — for your mom and dad, for your family, for the people who helped you get there.” Don will take that attitude — that work ethic — into his new role in the MLB this spring as the Dodgers’ manager.