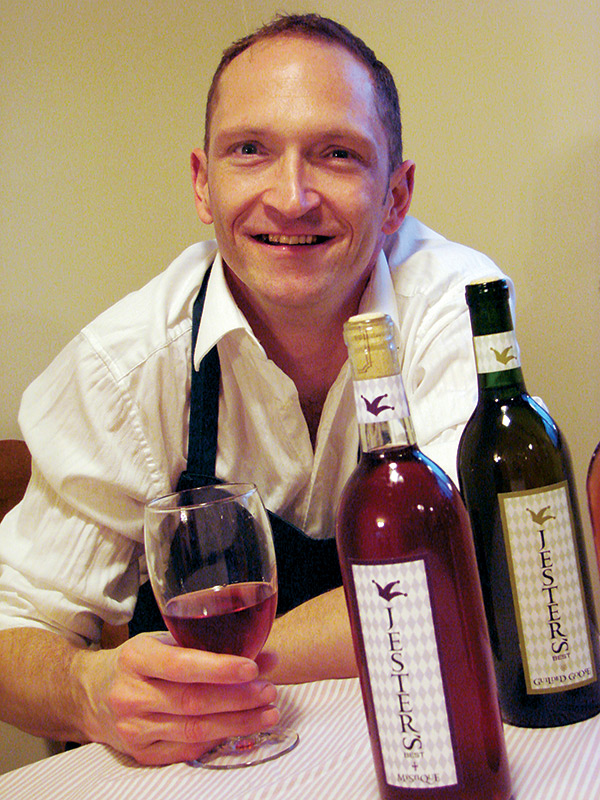 Frozen grape juice concentrate, yeast, sugar, a glass jug, and a balloon were all Damon Murray needed to make his first batch of wine, inspired by a basic how-to on the Internet.  “Within minutes, the balloon (stretched over the bottle opening as an airlock) started inflating, so I knew it was working,” he says. “The next day, I checked on it only to find that the balloon had popped, spraying the room with a nice purple pattern.”

That was 15 years ago. Today, Murray has refined the process, and under the name “Jester’s Best,” he produces eight flavors of fruit wine in his Evansville basement including Mystique (raspberry, blueberry, strawberry, and blackberry) and Nine & Forty (white grape and peach). He talked with Evansville Living about his hobby.

In the beginning, I was afraid to use real fruit, and I didn’t write down the process. I used concentrated juices, dumped it all into jugs, and hoped for the best. What I ended up with was a yeasty and sometimes carbonated mess that could only be classified as toxic waste. … Through trial and error, I eventually took the leap into fresh fruit and juices. It takes a little longer with fruit and requires a lot of straining, but it pays off in the long run.

The name “Jester’s Best” came from a poem that I wrote many years ago, called “The Jester.” I entered it into a writing contest in Martinsville, Ind., and won. I always have been a somewhat jovial person, and laughter is so good for relieving stress, so the Jester name is somewhat fitting for anything associated with me.

(My seasonal wine) Two Cartwheels actually is made with dandelions. As it turns out, it is not only delicious, but one of my favorites. I have friends “harvesting” the pesky flowers from their yards every spring and freezing them for me.

It always is nice to have a good glass with dinner, knowing that it wasn’t something you picked up at the store, but a beverage you made with your own hands. … I used to not be the most patient of people, but the winemaking process has shown me that if you allow time for it to perfect itself, the results are amazing.