Up in the Air 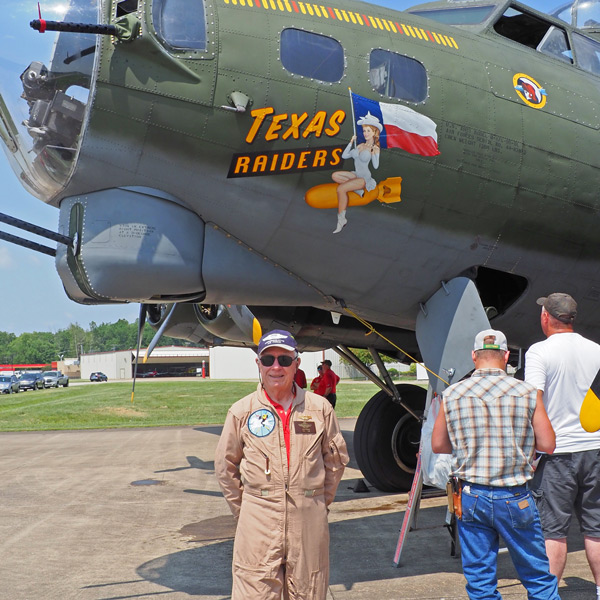 Evansville may be the third largest city in Indiana, but from the air, every car, building, and person shrank in front of my eyes. The sprawling city was quickly reduced to a far-away plain below the B-17 Flying Fortress “Texas Raiders” during my flight this morning.

Commemorative Air Force load master Col. Dan Ragan is familiar with the view; he watched the ant-like dots of U.S. Navy fleets out of the same windows during the Korean War. At just 20 years old, Ragan was a radio officer aboard that exact aircraft, which acted as one of the first early warning and control system planes to warn boats of approaching kamikazes.

On our media flight, I sat in the radio room, just behind the bomb bay — the same room Col. Ragan worked in. Feeling the sun beat down on me from the open hatches on the ceiling while the plane launched itself off the tarmac at the Evansville Wartime Museum (7503 Petersburg Road), was exhilarating and nerve-wracking, but still incomparable to the feelings Ragan and his crewmates experienced on their first flight into war. 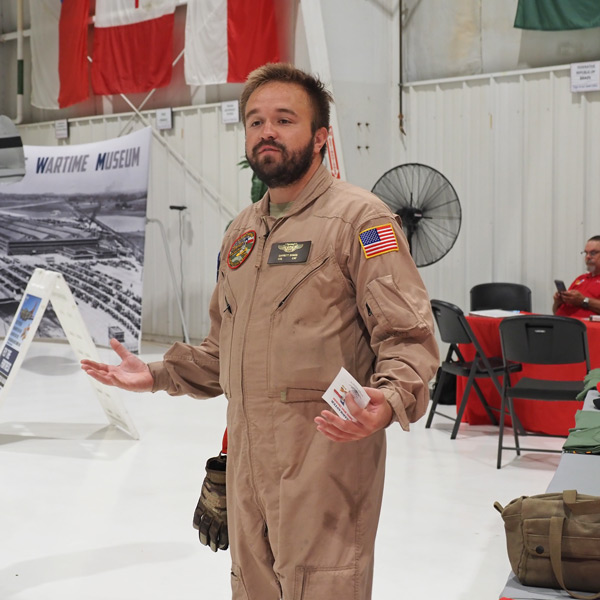 I’d have to agree to disagree with Col. Ragan on the musicality of the engines — their loud roar drowned out any other sounds in air and on the ground.

Luckily, the “Texas Raiders” crew of volunteers — who sacrifice their free time to support CAF tours — are experts at passenger flights. Load master Col. Garrett Bragg walked myself and fellow media members through safety instructions, including emergency exits, seatbelt assembly, how to safely move about the plane after takeoff, and — my personal favorite — when to put our complimentary earplugs in.

After entering the rear of the plane behind the waist-gunner hatches, I buckled myself into my seat in the radio room and popped a foam plug into each ear. Once in the air, Col. Bragg came in and gave the all-clear. I couldn’t help but imagine the calm voice of a commercial flight pilot telling me I was “free to move about the cabin.” 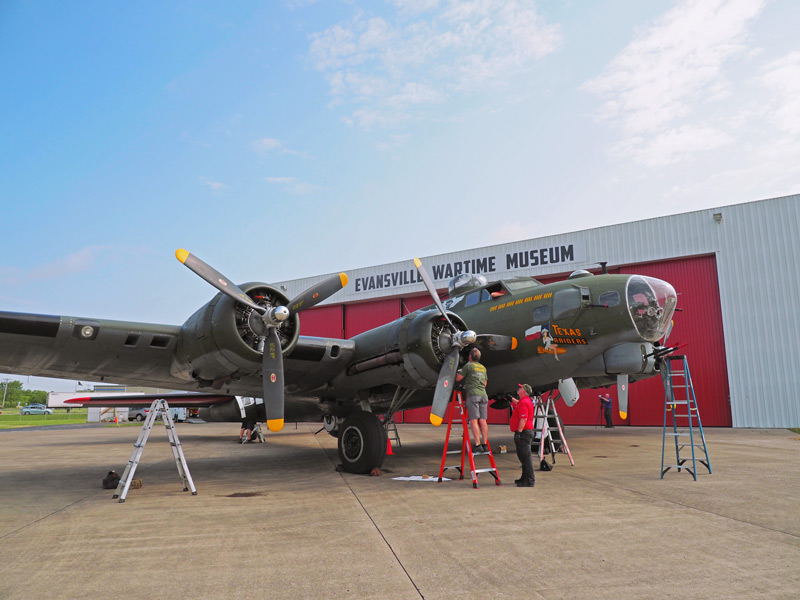 But B-17 bombers are far from commercial planes. With exposed hatches, narrow walkways, and gun turrets original to the plane, the aircraft is a tight maze to maneuver. I wove through the narrow spaces and watched Evansville fly by beneath me. It was hard to pinpoint our exact location, but the bend of the Ohio River remained a comforting site on our short 20-minute flight. 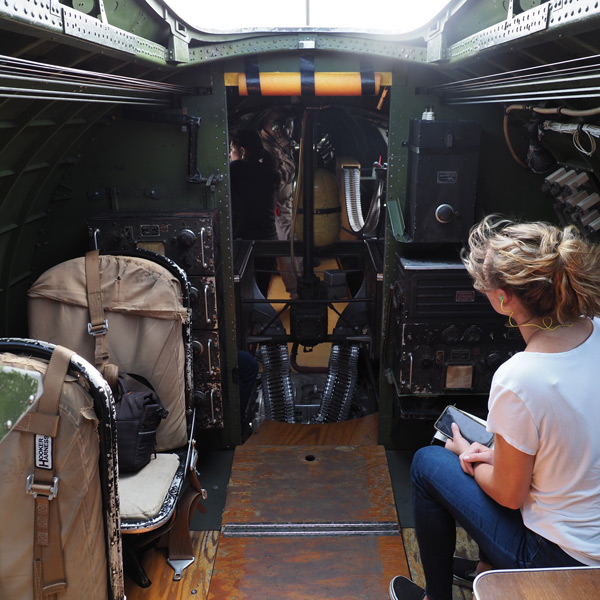 As I peeked into the cockpit, held a machine gun out of the waist gunner windows, and scooted along the gangway above the bomb bay doors — which we were told would automatically open if hit by anything weighing more than 100 pounds — I had to remind myself of the historical gravity of this flight.

The “Texas Raiders” plane was built on July 12, 1945 (and will be turning 76 this year), and mainly served in the Korean War. It’s flown to China, Japan, Korea, Hawaii, and more. And now, it was carrying me across Evansville.

“I always tell everybody, as soon as you get up there and get situated, think about the boys who rode on these,” says Col. Bragg. “They were not on a passenger flight; they were not having fun. This was a job; this was a mission for them, so take a second and put yourself in their shoes as best you can.”

Before I knew it, I saw Col. Bragg giving the back-to-your-seats signal through the hair the vicious wind had blown into my eyes. As suddenly as we had been in the air, we were back on the ground.

For every two feet that hit the tarmac, another wide smile was added to our group. From crew to passenger, we were a flurry of grins and exclamations of “that was awesome!” And it truly was awesome — a once-in-a-lifetime experience that encompassed the excitement of air travel as well as the importance of historical education and remembrance.

The “Texas Raiders,” hosted by the Wartime Museum, will be in Evansville through Sunday, July 11 for tours and flights. Tours of the grounded B-17 will be held 10 a.m. to 3 p.m. (excluding flight times) July 8-11 at the museum for $20. Flights will be conducted at select times on Saturday and Sunday and cost $495 for the B-17, $380 for the visiting SNJ/T-6 Texan advanced trainer, and $100 for the twin-engine Navy JBR “Little Raider.”

For additional information or to book a flight, visit b17texasraiders.org/index.php.
For information regarding Evansville’s wartime history and other upcoming flight activities, visit evansvillewartimemuseum.org.