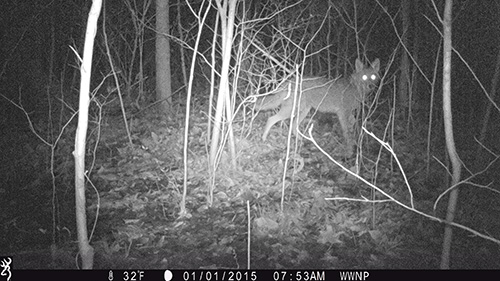 Southern Indiana is home to many species of off-putting animals, like rattlesnakes and brown recluse spiders, but it is the recent coyote sightings in neighborhoods off Lombard Avenue and Rosebud Lane in Newburgh, Indiana, that come top of mind now. While seeing a coyote saunter through an urban backyard is disconcerting, Wesselman Woods Natural Resource and Operations Manager Shelby Hall says it is nothing to truly fear.

“It’s incredibly normal,” she says. “One reason is that coyotes are pretty opportunistic, and they don’t need exactly what you would think of as a forested area to survive. They’ve figured out what to do in an urban setting, and they’re very good at it.”

In fact, Hall says coyotes can be expected to appear in urban settings as long as there are resources available for them, like dog food left outside or food in trash and compost bins. Most coyote sightings fall during dawn and dusk hours. However, they have adapted to human influence and sometimes can be seen during the day.

“You shouldn’t be too concerned if you see them here and there,” says Hall. “But if you see them all the time during the day, they’re approaching people, following kids, stalking pets, and they’re making their presence known, that’s a bigger concern.”