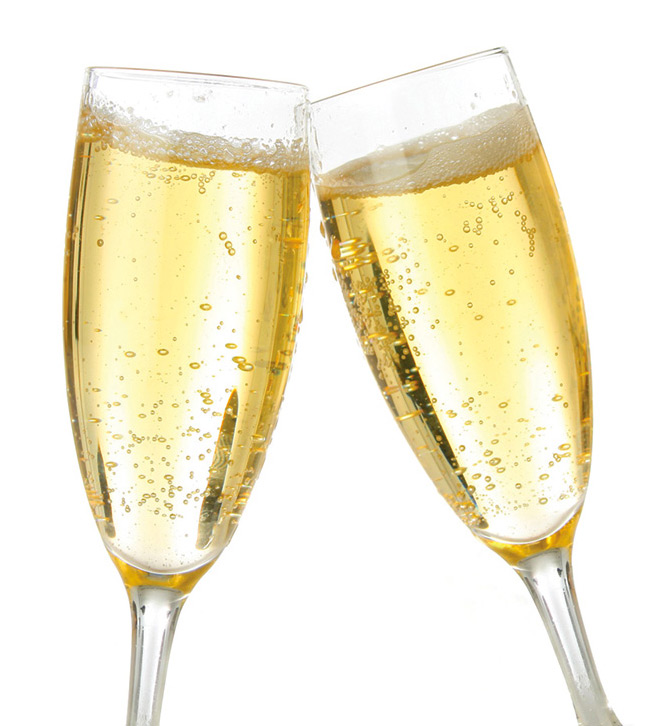 Some think of Champagne and sparkling wine as just the stuff of celebrations. But practice makes perfect, after all. If the bubbly you had on Dec. 31 didn’t quite make the cut, we have four suggestions for you. Each of these bottles can be purchased here in Evansville for prices ranging from about $15 to roughly $40. The key thing to know is that while all Champagne is bubbly wine, not all bubbly wine can call itself Champagne.

Of this, about 75,000 acres are now in production and less than 80,000 acres may legally be used to grow Champagne grapes, she says. Thus, all the vines of Champagne would easily fit into, say, the city limits of Denver, Colo.

That’s not a lot of space for one of the most famous drinks in the world. And that begs the question: What makes Champagne so special anyway?

Well, to be honest, it wasn’t always considered a treat — at first. In fact, MacNeil says, the clerical winemakers of the 17th century were initially frustrated by its tendency to foam. The Champenois were not amused, she writes. Wines that foamed were frightening. Worse, it seemed that only the wines of Champagne behaved so strangely. Wines made in Burgundy — Champagne’s arch rival — never bubbled.

Eventually, though, the residents of Champagne decided that maybe this sparkling wine wasn’t so bad. In fact, maybe that’s what made it so distinctive.

So why does Champagne — or sparkling wine — have all that fizz? Well, the Champagne region is one of the coolest wine-producing areas in the world, MacNeil says. Back in the 17th century, wines were made in the fall and were left to settle over the winter. The cold temperatures would generally paralyze the yeasts, halting the fermentation before all of the grape sugar had been turned into alcohol, she says.

Once spring arrived and the wines (and yeasts) warmed up, they would begin to referment — or sparkle.

That said, only Chardonnay, Pinot Noir, and Pinot Meunier grapes can be used to make Champagne. And two Champagnes and two bubblies we had recently used at least one of all three.

For about $30 at Winetree on Weinbach Avenue, you can find the Piper-Heidsieck Brut Champagne. This is a combination of 55 percent Pinot Noir, 30 percent Pinot Meunier, and 15 percent Chardonnay. This non-vintage bottle is highly carbonated and very dry with bubbles that pull at the tip of your tongue. Yet at the same time, there’s a juicy mouthfeel.

The Mumm Cordon Rouge Champagne, which is 60 percent Pinot Noir, 30 percent Chardonnay, and 10 percent Pinot Meunier, is about $40 at Winetree. This non-vintage wine is crisp, with very few bubbles. At least one person we shared it with said it was smoother than the Piper-Heidsieck. It’s a good fit for someone who gets overwhelmed by heavy carbonation. Both the Piper-Heidsieck and the Mumm have a dry toast flavor.

The Blanc de Noirs was a big hit at a recent gathering of our friends and family. The color was amber and it had a light carbonation. It was more aromatic, giving off faint scents of fruit. It also had a softer feel. The Rose, however, was unique because of its raspberry seltzer color, one of our guests said. It had a more long-lasting mousse, which is another word for that frothiness at the top of the glass. One person thought it was more tannic, or drying on the tongue, than the Blanc de Noirs.

Meanwhile, regardless of which bottle you choose, there’s good news for those who like Champagne and/or sparkling wines. It turns out that certain compounds within Champagnes may protect the heart and the brain, according to a study led by David Vauzour and published in The Journal of Wine Research in 2011.

So what does all this mean for the person who’s just looking to toast the New Year? From Tucker Publishing Group, at least, that’s easy: Health, happiness, and all our best wishes for 2013!