A Beatle in Illinois

Next time Warren Batts plays at the Red Geranium in New Harmony, Indiana, drop by, introduce yourself, and thank him for me. The guitarist and singer was a big help to me when I was reporting my story, “Meet the Beatle,” which appears in the May issue of the Smithsonian Magazine. I don’t think I could have done it without him.

The story is about George Harrison’s visit to southern Illinois in September 1963, six months before the Beatles’ appearance on “The Ed Sullivan Show.” The Fab Four hadn’t released any records in the U.S. at that time, so no one knew who George was — except that he was Louise Harrison Caldwell’s skinny little brother who said he was in a band back in England. Louise, who had married a Canadian mining engineer, moved to Benton, Illinois, when coal was king. By this point, the Beatles were big stars in the U.K. but unknown in this country and needed a break from touring and recording. Paul and Ringo went to Greece. John and his wife visited Paris. George went to Benton.

He was in Benton for two weeks. He and his sister’s family visited the Garden of the Gods, Pound’s Hollow, the Marion Drive-In, and the Dog ‘n’ Suds. They also went to the VFW Hall in Eldorado, Illinois, where George sat in with a local band, The Four Vests. George got to know some of the area’s musicians, which included a neighbor, Warren Batts, who had toured with Bill Haley’s Comets. Warren lives in Henderson, Kentucky, these days and still performs. George would come to Warren’s house, and they’d practice their guitars.

“He really liked Chet Atkins and Carl Perkins, and we’d work on their licks,” Warren told me. “He didn’t seem especially ambitious about the band he was in back home, but he was serious about being a better musician.” 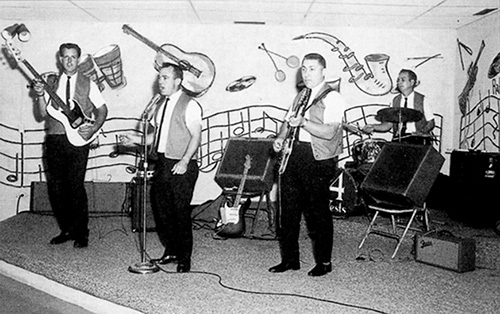 I got to know Warren through a mutual friend, and here things get personal. I spent the first five years of my life in Evansville. My father Gene Crawford was a popular presence on WGBF radio. He had grown up on a farm in southern Illinois, and the week I finished kindergarten at Washington Elementary, he moved us 50 miles west to Eldorado, where for the next five years, he both farmed and worked at the station.

We were on the farm in February 1964 when the Beatles appeared on “The Ed Sullivan Show.” That’s when we began to hear stories one of them had a sister living just 30 miles away and he’d visited her. There was even talk about his gigging in Eldorado. I was a child then, not a grown-up journalist, or I’d have done my reporting then and there when a lot of people who had met him were still alive. Sadly, many of them have since passed away, but not all. I met some of them when I did my reporting last November, including a few who were at the VFW Hall that very night.

I remember “The Ed Sullivan Show” and Beatlemania like it was last week, if not exactly yesterday. We moved back to Evansville in the summer of 1964, and on Thursday nights after I’d been sent to bed, my sister would put the WJPS “Beatles Hour” on her transistor radio. I’d listen in from my room across the hall. She bought Beatle magazines, which I read, and we looked at — but I swear we did not buy — plastic Beatle wigs at Shopper’s Fair. Like thousands of American boys, I begged for a guitar for Christmas, and my parents hid it behind the Christmas tree, building the suspense in that diabolical way parents have.

My best friend got a guitar for Christmas that year, too, and within a couple of years, we’d formed our own band, the Accidents. We played at the Recreation Nights at Washington, a youth group dance at Olivet Presbyterian Church, and in the summer, “toured with” the Show Wagon. The Accidents would bring down the house, or playground, with our rousing rendition of “Shortnin’ Bread,” which was probably adorable since we were barely 13 years old. The Accidents broke up before we even entered Bosse High School, which my friend says shows we “were ahead of our time. A lot of bands don’t break up until years later.”

Our drummer was Leonard Bush, and it was Leonard who knew Warren Batts and put me in touch with him for my Smithsonian story. I had gone to kindergarten with Leonard, so I already knew him when I returned to Evansville and we started the band. Leonard, who had taken up the drums, was a small, diffident boy who fit in well because he went about his drumming in a quiet, unassuming way.

Decades passed and I never thought much about Leonard one way or another until about 20 years ago, when I did a book signing at the Barnes and Noble. A tall, broad-shouldered, confident fellow with a deep and resonant voice introduced himself, and it was a joy to see the mature man Leonard had become. He still was playing music, he said, and thanks to posts he’d put on Facebook, I learned he could play a mean blues harp. 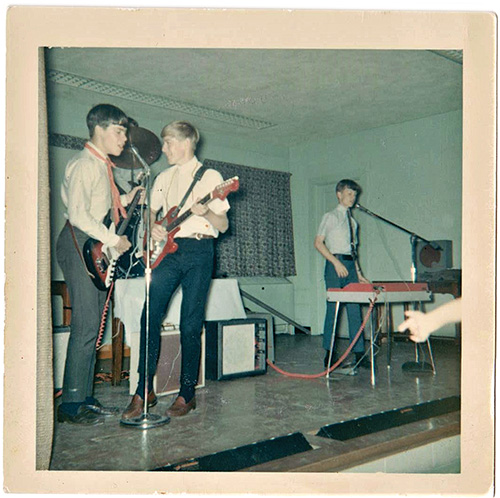 Soft spoken as always, Leonard had a wry sense of humor and the butt of the joke was always himself. His genial, accepting nature was never more evident over the next few months when, little by little, he began to share details of worrisome medical problems. He’d go to Vanderbilt Cancer Center periodically and things seemed to be improving, but they weren’t. On Feb. 3, Leonard posted a picture of himself in a hospital bed with tubes running every which way, writing, “How do I look? Love you guys.” Two days later, he died.

At this point sentimentalists would write something about Leonard jamming with George Harrison in the Righteous Brothers’ “Rock and Roll Heaven,” but that is not my style. Most of the things we experience in this life are only moments, and we should not pretend otherwise. Leonard once joked about “getting the band back together,” but that is now difficult. We’d need a new drummer, of course, but there are lots of bands doing reunion tours these days, with maybe one or two members of the original band up there on stage, trying to look and sound like they did in 1966.

I think it is for the best we don’t take that route, though I might be persuaded. There is no hurry, in any case. The two Accidents who are still around remind one another that our fans are not fickle. They are in it for the long haul, and if they have waited more than 50 years to hear us, there’s no reason they shouldn’t be willing to wait 50 more. If they know of any bootleg tapes of our performances, of course, that is something we would like to discuss.