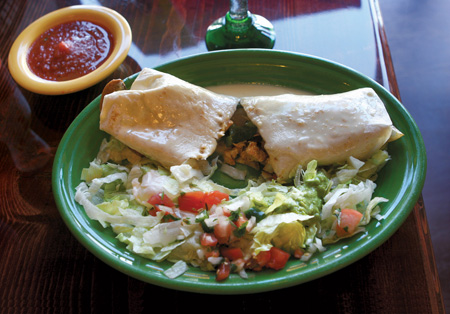 It’s not that the look of Los Tres Caminos is unique compared to most other Mexican restaurants — it has the aesthetically pleasing mix of colors throughout the interior that creates the atmosphere of an Americanized Cinco de Mayo fiesta — but there is a certain crispness to the Evansville restaurant worth noting. Although more than nine months old, Los Tres looks brand new—clean and polished.

Owner Frank Lomeli had anticipated this upgrade since last December, and now the two-month-old menu sports a fresh, vibrant look with new dishes such as the fish tilapia plate ($7.99), a cheese and sausage (Choriqueso) appetizer ($3.99), and the Ribeye ($12.99).

Lomeli wanted his restaurant to bring growth to its Highway 41 address on the North Side. “The owner wanted to open here a long time ago,” says manager Jose Mendoza. “(He) thought this area was growing.” Lomeli, who dreamed for years of bringing his Degollado Jalisco, Mexico heritage closer to his home in the United States, already owned nine other Los Tres Caminos restaurants throughout Indiana and Illinois, and Evansville became his tenth pursuit.

Here, they’ve not only incorporated a lineup of Mexican-inspired dishes such as my order of the burrito loco ($7.99) — a mix of mushrooms, chicken strips, bell peppers, tomatoes, and onions inside a warm flour tortilla — but also are creating customer involvement. Every Monday has become trivia night. From 7-9 p.m., tables compete for the grand prize of a $25 Los Tres gift card by answering questions about movies, sports, history, and nature. So far, it’s gone over very well, says Mendoza, and so have Monday’s $1.99 margaritas.