A Witch in Evansville? 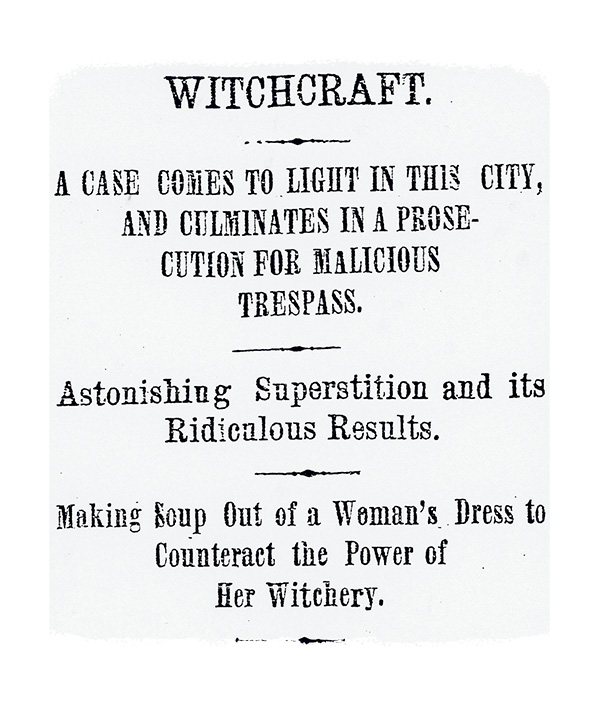 Over the years there have been tales of ghosts, haunted places, unexplained lights, and other supernatural happenings in Evansville, but in 1877 an Evansville woman was accused of being a witch.

In November 1877, 68-year-old Caroline Pfeiffer was having a cup of coffee at the Albert Fisher Hotel on Fourth Street, where she set up her vegetable stand along the upper portion of the street’s market area. After Philip Vogt pointed her out, Marx Eichel ran up behind her with a butcher’s knife and cut out a swatch of her calico dress. Eichel’s arrest brought out a story printed in the four daily newspapers for several days.

For more than three months, 19-year-old Julia Weil had been confined to her sick bed. Her brother Simon Weil was urged to call on Vogt, a person reputed to have certain powers. Vogt claimed Julia was not ill but bewitched by Pfeiffer who had given her certain powders and charms. Vogt claimed that soup made with vegetables from Pfeiffer and a piece of cloth from her dress would break her spell.

Eichel, a cousin, was enlisted to obtain the piece of calico. While the Tribune stated “the number of people who believe the story that Miss Weil has been bewitched is truly astounding,” the Journal stated “the wonder is that any person in the broad light of the 19th Century could be found so ignorant and stupid to believe in witchcraft.”

Julia Weil, who did partake of the soup, was reported to be much improved afterward.