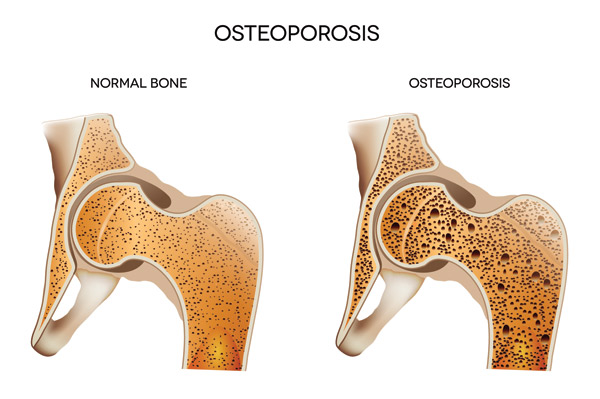 When it comes to our bones, there are many myths and misconceptions. From a break being worse than a fracture to the disease of osteoporosis, there’s a lot to learn concerning bone health.

One of the biggest myths is about osteoporosis, says Linda Mitchell, clinical director and physician assistant at Orthopaedic Associates, which has offices in Evansville, Newburgh, and Vincennes, Indiana, and Henderson, Kentucky. The disease causes bones to become weak and brittle and affects millions of people in the world.

“I think the general population doesn’t have a good idea of their bone health, or where they stand,” says Mitchell. “No one wants to think they have osteoporosis, but statistically there are 9 million women and 3 million men that have it. And there are more than 2 million fragility fractures that occur every year.”

Another myth about the disease is that it only affects older patients. Mitchell says that’s not necessarily true. “Even younger patients can be affected by osteoporosis if they have a metabolic disease, for example thyroid problems or diet absorption problems,” she adds.

Other common myths have revealing answers. When it comes to the difference between a fracture and a break, Mitchell says the distinction is in terminology only.

“Everybody uses those terms interchangeably. In (general) terms people call it a broken bone, in medical terms we say you have a fracture. It’s really the same thing, just different terminology,” she explains.

Another misconception: bones stop changing after they become fully developed. “Our bones in our body are constantly being broken down and built back up,” says Mitchell.

She explains that doctors call this remodeling and as we age, bones do not become as strong during the process. “The calcium we’re putting back into our bones is not as strong. That’s where the bone density lessens,” she says.

As for the myth that bones heal and become stronger after a break, Mitchell says there is a bit of truth to that.

“When you break a bone, you get what we call callus formation around the bone, so it actually is thicker for a time while it is healing,” she says. “The density for a while in the bone, after a fracture, is a little bit stronger, but then your body kind of evens that out as it continues to remodel.”

Taking care of our bones is more complex than simply drinking milk and eating healthy. “While a good, balanced diet helps, it doesn’t prevent osteoporosis. We often have to supplement people with calcium and Vitamin D,” says Mitchell. “Vitamin D levels tend to be very low in this part of the country. So you can take all the calcium in the world you want, but if your Vitamin D level is not normal in your body, you won’t absorb that calcium.”

Other tips Mitchell says will keep your bones healthy include avoiding excessive caffeinated products such as coffee and sodas, not smoking, limiting alcohol use, and doing weight-bearing exercises.

“If you stress your bones by lifting weights or by walking with weights, it actually keeps your bones strong,” she says. “Be more active in using your bones because it’s stressing them that makes them stronger.”

For more information about Orthopaedic Associates, call 812-424-9291 or visit oaevansville.com.