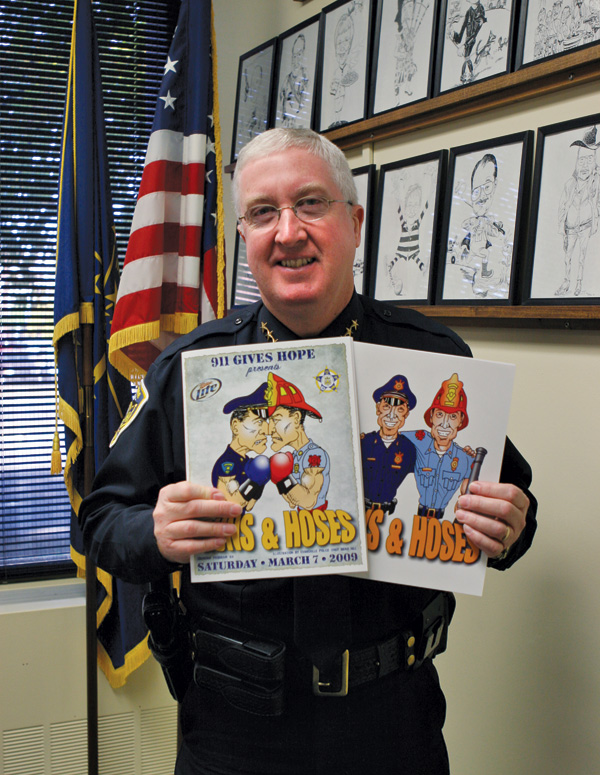 In 1978, soon after graduating from the University of Evansville, artist Brad Hill sketched a tranquil, wintry scene: a police officer standing on a hill under a starry sky, looking down on a snow-covered city. He mailed photocopies of the drawing to friends and family as Christmas cards, and for nearly three decades, Hill has carried on the tradition of spreading good cheer by delivering hand-drawn holiday greetings (now scanned, colored, and printed via computer) to more than 500 people.

Hill, the chief of the Evansville Police Department, finds time to draw in the evenings and on weekends, especially during the holidays. His cards often are comical scenes that include his wife, Sue; son Travis, 25; daughter Amy, 23; and Hill as “the butt of the joke,” he says, “falling off the roof while trying to put a star on the house or stuck in the chimney as Santa Claus.”

Hill also draws caricatures for officers retiring from the department, and he’s created a coloring book for National Night Out, an annual event that aims to strengthen police and community partnerships. And the drawing of a scowling police officer and a firefighter facing off in the boxing ring? That’s Hill’s, too, seen on the program and billboards for the Guns and Hoses charity boxing match. “It’s a great event,” he says. “I’m tickled to contribute in some way without getting punched in the face.”

I felt like art was something I would do for fun rather than something I should do as a career. I felt law enforcement was God’s will for me, to be able to work with people and serve people.

But art, that talent, is something I feel is a gift. The retirement cards for officers and the Christmas cards are something you hope brings a smile to somebody’s face.

(The National Night Out coloring book) was to give kids a positive depiction of officers, deputies, and firefighters, to show they’re somebody they can trust and turn to. Of course, you had to have the obligatory cat in the tree for the firemen to get down. The cover for the coloring book is not the same as the cover for the brochure for Guns and Hoses … This one, we’re buddies, and that’s in fact the truth: We work together every day, helping each other out.