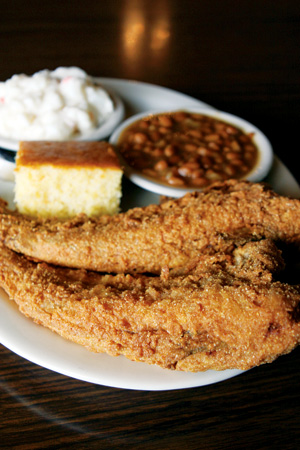 My goal was to eat eight catfish fiddlers in one sitting. The arena for such an undertaking was KT’s Fire Grill in Wadesville, Ind., where weekends kick off at 4:30 p.m. for “All U Can Eat Catfish Fiddler Friday” ($9.95). The final tally was (mostly) three, and a fourth fiddler sat on my plate taunting me.

One patron boasted to owners Keith and Teri Kelley he could eat 40 fiddlers for dinner. His final tally: eight. Don’t laugh. These are honking fiddlers, and every Friday, the Kelleys serve an average of 160 catfish to a packed house.

The fiddler entree sits on a menu highlighted with meaty meals, including numerous smoked plates with rich hickory and apple wood flavors, in a restaurant best known for steaks and prime ribs. The recipe, which the Kelleys keep secret, came by accident. A former cook “just started throwing stuff in the batter,” Teri says. What luck because the fiddlers’ moist and tender meat has a wonderful cornmeal, flaky crust that doesn’t seem like an accident. “Everybody loved it,” she says, “so we just stuck with it.”