Hydroponics is not a cheap hobby. Scott Massey and Ivan Ball discovered this during their senior year at Purdue University while building personalized farming devices in their apartment in West Lafayette, Indiana. The idea came from NASA-funded research they worked on to develop LED grow lighting for a hydroponic growing system (a method of growing plants without soil) for the International Space Station.

“I was dumbfounded why this wasn’t a mainstream technology solving a lot of the inefficiencies you hear about with agriculture,” says Massey, an Evansville native and graduate of Reitz Memorial High School.

Massey and Ball, a native of Owensville, Indiana, had an epiphany. Personal appliances were much easier to scale and required significantly less investment dollars and capital. Heliponix was created, selling GroPods that allow users to grow produce in their homes using hydroponic technology. 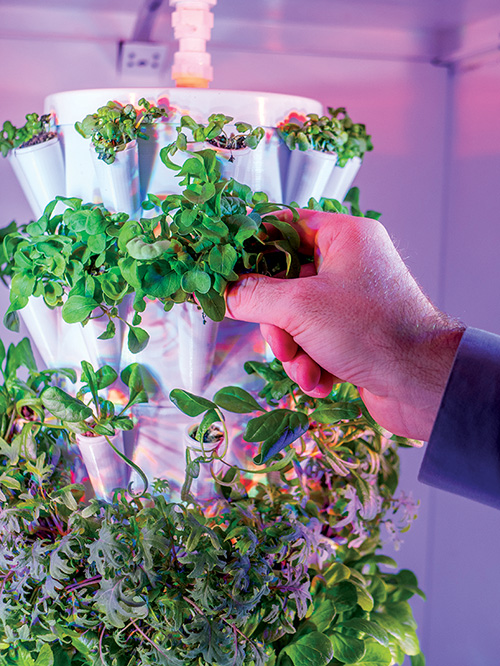 After traveling throughout the Midwest their senior year competing in business plan competitions, the duo secured enough capital to cover the first five patents on the GroPod™ design. The GroPod™ uses rotary aeroponics, which incrementally rotates the tower of plants for equal light coverage. All interaction, aside from harvesting the plants and adding water to the appliance, is done through the company’s mobile app. Using seed pods, which are ordered online through Heliponix, users can grow all types of plants from romaine lettuce to basil.

“Everyone thought we were crazy skipping class and working every weekend on this ‘growing thing,’” says Ball. “After we won a couple back-to-back business plan competitions, we knew we were on to something.”

Since graduating in 2017, the pair have continued to grow the business here in Evansville and currently have 15 active users.

“I see a lot of startup companies get the entrepreneurial itch, and they have to be in the Bay Area,” says Massey. “We believe this company is going to be worth a lot of money someday. Why would we dilute ourselves now? Evansville is the perfect place to run the business.”