It was natural for Connie Weinzapfel to find herself a home in New Harmony, Indiana. For 30 years, she had made the small community her home base for her career — first as director of the New Harmony Gallery of Contemporary Art and then as director of Historic New Harmony. But it wasn’t until 2017 that she began to seriously consider making the artist village her home.

“My true friends I’ve had over the years were here in New Harmony,” says the retired director. “But also, it’s a planned community, and I think that makes for an interesting place. And a good place for me.”

Connie spent the majority of her life living in her hometown of St. Philip, Indiana, just 30 minutes southwest from New Harmony. She and her son Andrei Parrent lived in a home across the street from her parents. Her former house also was close to her family’s farm.

“It was just a wonderful, wonderful place. Andrei went to the same grade school as my grandfather. We had all the generational stuff and that was important,” says Connie.

However, after the passing of both of her parents in the last five years, her son attending college in Colorado, and her retirement, she felt it was time to look for a home that fit her needs better.

“This house is kind of perfect. It has two bedrooms and two and a half baths. The layout is really wonderful; it’s very functional,” she says.

The home she now resides in is 11 years old and was designed by architect Keddy Hutson of Monticello, Illinois, as a part of a plan for six lots located near the entrance of New Harmony. Each of the homes were designed in what Hutson referred to as a Neo-Harmonist style, as he used elements from the homes originally constructed by the Harmonists.

“They followed what is called ancient geometry, which is perfect proportion,” says Connie. “I haven’t put numbers to this house, but because it feels so right, it’s got to be similar to that geometry.”

Even the brick color on the exterior of the home is reminiscent of those first homes built by settlers.

The third owner of the home, Connie came into the space and changed the interior completely. All the tile in the kitchen and baths were changed; the colors of the walls updated to a palette of soft blues, yellows, and whites.

Much of the flooring — except for the dining room and living area — was replaced as well. In the dining and living room, Connie decided to keep the original wood flooring, which had been hand-hewn and installed by an Amish builder.

The kitchen includes a new island counter top, which was made with recycled glass and concrete by a company from St. Louis. The cabinetry, however, is original to the home and was made by local artisan Curt Schmitt.

Connie’s home is a collection of vignettes (as she likes to call them) of the things and the people she loves most in her life. The entryway immediately introduces guests to an inset that features items in various squares — some an homage to her late husband Jim Parrent and his love of fly fishing and others a tribute to the town she now calls home. 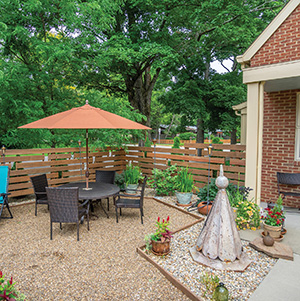 “Everything tells a story,” she says.

Her cozy living space features a fireplace, large windows, and another inset of vignettes. Connie decorates with art she has come to love over the years and pieces she’s collected during her travels — her living area features an 1860s reversed glass painting of Shakespeare’s Romeo and Juliet, while a small, decorated table features a velvet-covered bust of the Greek god Apollo. Upstairs, the small open hallway is adorned with her beautiful collection of Hermes silk scarves.

Her style is one of eclectic tastes, she says, with a slight French theme. A self-proclaimed Francophile (her family has ancestral ties to France), Connie has several items with a French aesthetic — including a Marie Antoinette cookie jar with a swiveling head dotting her rooms. The most impressive design element, however, is the wallpaper found in the downstairs half bath and upstairs loft lounge.

Created by Christian Lacroix, the style is known as cocarde and is a combination of photographs of items collaged together, laid over gold in the bathroom and silver upstairs.

“The story is during the French Revolution in the 18th century, women would take scraps of things they had and make these medallions (cocardes),” says Connie. “They would put them on their hats or coats to show they were revolutionaries.” 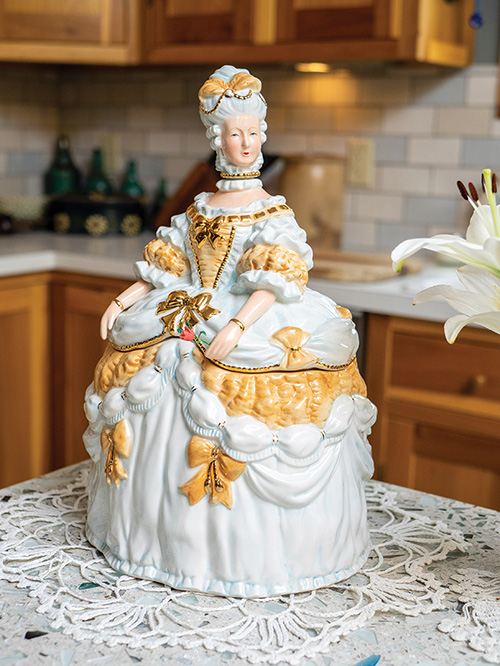 Her original plan had been to construct a new home, with the Neo-Harmonist design, on a lot two over from the house she currently occupies. Unfortunately, the contractor she had been working with injured himself and her plans had to change. As her design was to be the same as the then vacant house on the corner, Connie toured the home when it went on the market and knew it was exactly what she was looking for.

“It was just the feeling — that beautiful place where architecture creates a feeling and mood. That’s what I was responding to,” she says. “For me, this house was a great opportunity to start from scratch. The bones of the house are fantastic.”

A year after making her move, Connie still feels her Neo-Harmonist home has been the right fit for her — the perfect “empty-nester” space.

“It’s all about items I love,” she says. “I’m lucky to be at a place in my life now where I have the health and time to make it that way.”