I like to make connections. Some call it chance – when circumstances collide to reveal a story. Some, too, say connections are the result of active critical thinking, creating the context for the connection to be meaningful. Recently a vivid childhood memory was brought alive for me by a couple of unique connections. 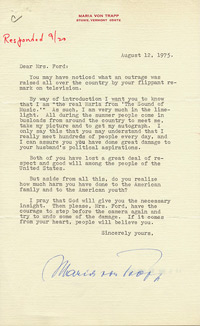 Last month I visited Ann Arbor, Michigan; I was among 20 journalists – travel writers, magazine writers, and photographers on a press trip hosted by Destination Ann Arbor. You can read my story in the July/August issue of Evansville Living. Ann Arbor is home to the Big House, Michigan Stadium, the largest stadium in North America, Ann Arbor. It’s also home to the Gerald R. Ford Library. I have visited the William J. Clinton Presidential Library and Museum in Little Rock, Arkansas, and I was excited to the Ford Library, which is on campus. The 38th president helped the Wolverines to two undefeated seasons and national titles in 1932 and 1933.

Under glass on a conference table outside of President Ford’s office in the library (which he used during his visits there), copies of notable correspondence are on display. Maria Von Trapp (the real one, she notes) admonishes First Lady Betty Ford for the forward-thinking comments she made on 60 Minutes in August 1975. An archivist showed us the president’s baby book – he was born Leslie Lynch King Jr.; his parents separated when the future president was just two weeks old. 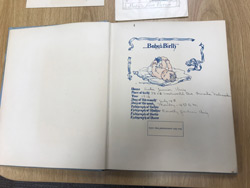 The visit to the Ford Library brought back vivid memories of watching President Ford’s arrival in Evansville on Air Force One. I tried to recall exactly what year that was. My childhood friend Bridgette, who went with us to the airport, confirmed my memory; somehow we were allowed near the tarmac to watch the president deplane. Somewhere in my old albums I have photos.

Now, here’s cool connection, finally! Writing my letter for July/August issue of Evansville Living, I researched Vanderburgh County events of 1976 – the Bicentennial Year – seeking information I might use as the county celebrates its 200th birthday this year. Top in the search result was a document Scanned from the President’s Daily Diary Collection at the Gerald R. Ford Presidential Library, April 23, 1976 – the day President Ford flew to Evansville on the “Spirit of 76.” 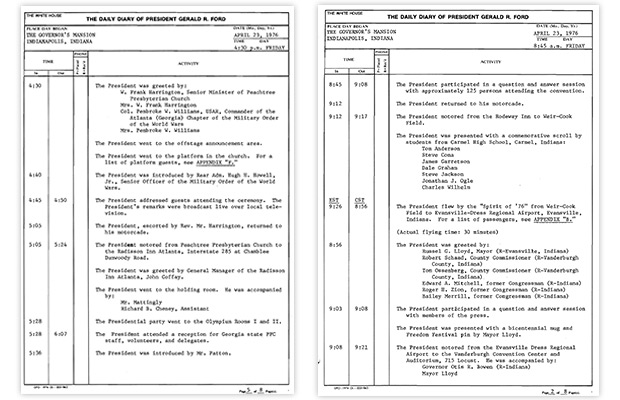