Elberfeld, Indiana, native and self-described country boy Vernie Menke had never been to New York City, but sightseeing wasn’t what brought him to the Red Ball Garage in downtown Manhattan in April 1975. He was with his teammates Tom Morton, from Newburgh, Indiana, and Paul Fischer, from Elberfeld, to compete in the secret car race the Cannonball Run that would take them from New York to Redondo Beach, California. The three-man team, with Menke competing as the youngest participant at 21 years old, finished in just under 41 hours with top speeds nearing 150 mph. A year after completing the Cannonball Run, Menke opened Menke’s Auto Repair in Newburgh, which he sold in 2016 after 40 years.

The car we raced in was a ’72 Torino station wagon. We made all kinds of changes to the car. We lowered the car way down, put a special suspension on it, reworked the engine, and actually the car flat out would run 148 mph. We put aircraft landing lights on this thing, because at that speed, we would outrun the lights on it.

One guy would drive, one guy would navigate, and one guy would be in the back trying to get some rest. But you didn’t sleep the whole way. Riding in the back of a car going that fast and knowing you may die at any moment, you couldn’t rest. We switched drivers every two hours, and that’s when we would fuel. 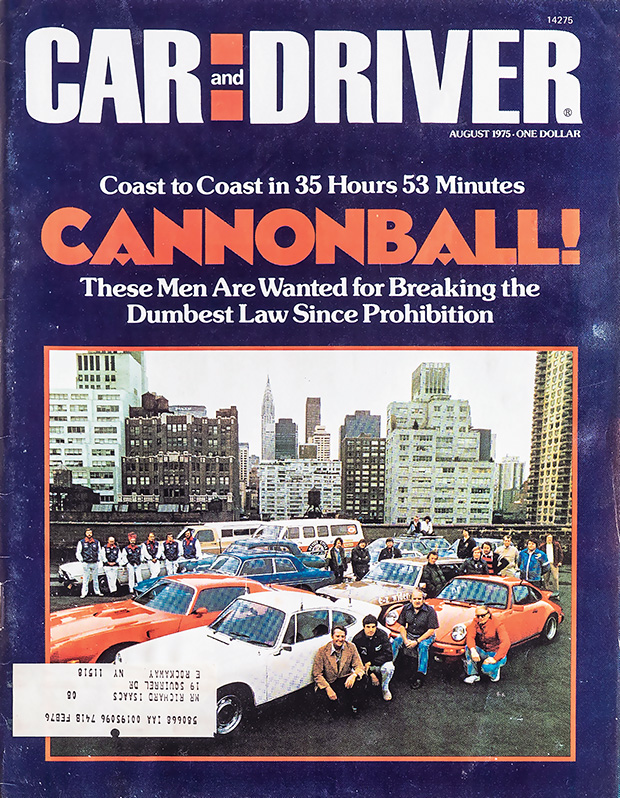 One of the questions everyone asks is, “Did you get any tickets?” Well, we didn’t get any tickets going out there, because we had radar detectors that were shooting out the front of the car and one in the back of the car so we could catch any cops coming up on us. Another thing that really saved us — we had a programmable police scanner in the car. We had books, like big telephone books, and it had every code to every police department in the country in there. The problem was we didn’t use a lot of that stuff on the way back, and we got three tickets.

We left downtown Manhattan, and for pretty much the first half of the race, we were flying. Tom had a logbook of where we needed to be at certain times, and we were so far ahead. I was driving, and we had just fueled an hour before. I was running like 130 mph, and the car acted like it was running out of fuel. It started bucking and all this stuff. What was happening was the alternator on the car went out and the battery was going dead, so we coasted over on the side of the road.

We sat there for a while. A couple from New York stopped and had some jumper cables, so they charged our battery long enough that we could get to the next town. There we bought another battery to get to the next town where there was a Ford dealership. We had to wait for them to open, and then we replaced the alternator on the car. The way I remember it, we lost about four hours right there.

We got back on the road, and with about 800 to 1,000 miles to go, we ran into another car that was in the race. It was a Porsche, and he wanted to top-end race. We top-end raced him, and we ran it wide open at 145 to 148 mph. The transmission just started slipping, and after that, we couldn’t run over 100 mph or the transmission would just go into neutral. That slowed us down. I think we lost like five hours total. We made it to Redondo Beach in 40 hours and 53 minutes. The winner was 35 hours and 53 minutes. I think if we wouldn’t have had those problems, we could have won it or at least ended up in the top two or three.

There are other people now days making these runs across country, but I don’t know who is monitoring their time and verifying that it’s really true. When I think back … I know how fast we drove and how dangerous it was. At my age now I look back on that and think, “That was really crazy.” 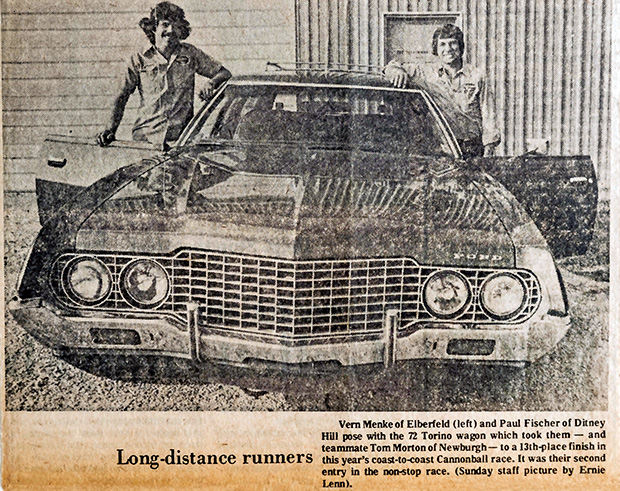 Menke and Paul Fischer pose with the ’72 Ford Torino station wagon that took their team cross country during the Cannonball Run. If it hadn’t been for car trouble late in the race, Vernie thinks they may have been able to finish in the top three.