Since opening in 2011, Bokeh Lounge has been known for its dedication to the arts in its space at 1007 Parrett St. in Haynie’s Corner. Now, Bokeh is attracting customers with its range of shareable bar grub and priced-right late night snacks.

Celebrating the one-year anniversary of Bokeh’s ownership change from Mike Millard to Moriah Hobgood, who also owns Mo’s House in Haynie’s Corner, the bar rolled out a revamped menu in April. The goal is to offer bar classics but with more finesse.

“We have tenderloin sandwiches and bologna sandwiches, but it’s a Cajun smoked bologna that we do,” says Travis Swayze, Bokeh’s head chef and kitchen manager.

A popular choice is the build-your-own burger, with an option of five cheeses including a pimento cheese made in house. The nachos are another favorite and come either on a 10-inch plate or 16-inch metal pizza tray. Almost every component is made fresh from the tortilla chips and pickled onions to the guacamole and queso.

From 9 a.m. to 2 p.m. Saturdays and Sundays, brunch is served from an expanded menu that includes biscuits and gravy, breaded tenderloin, build-your-own omelets, and breakfast bowls. For late night snacking, the bar also offers a $5 value menu until 2 a.m. with a quarter-pound burger, Cajun smoked bologna, pronto pups, and flatbread pizzas.

“We wanted to take bar food just a little step above what you’re used to,” says general manager Jessica Nuffer. “We want it to be great quality for the price you pay.” 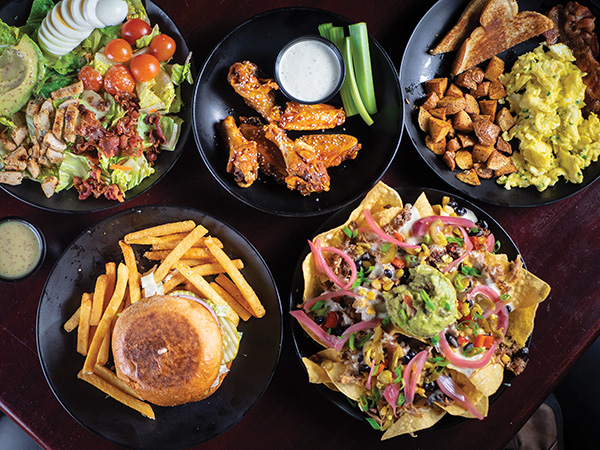