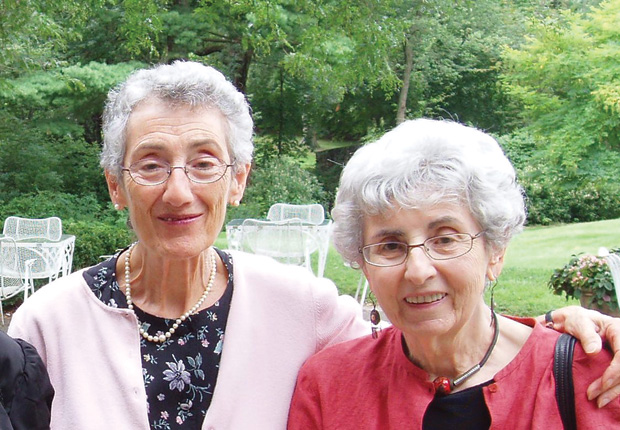 Alisa Palmeri was 5 years old when Germans bombed her city of Belgrade, Yugoslavia, on April 6, 1941.

In November 1941, Palmeri and her sister Ena Lorant, mother, grandmother, uncle, two aunts, and one cousin were among the last to escape the city, leaving behind the country they had called home and their father, who was fighting against the Germans in the war.

The Jewish family fled to the Veneto region of Italy, where they were placed under arrest as soon as they arrived. Though having to report daily to the local police, the family lived in relative peace until the summer of 1943, when Italian leader Benito Mussolini was overthrown and chaos erupted.

Palmeri and her family were forced to run again, this time heading south toward the Allies and arriving in the small Italian town of Amandola.

Evansville native and CYPRESS (Committee to Promote Respect in Schools) member Carol Abrams was talking with a longtime friend living in Washington, D.C., at the time who knew a student interested in the theater program at the University of Evansville. Abrams’ friend mentioned offhandedly the student’s grandmother had an interesting story — she was a Holocaust survivor whose family was saved by a town in the mountains of Italy.

▲ Sisterly Inspiration // Sisters Alisa Palmeri, left, and Ena Lorant, right, were saved by the Italian town of Amandola, below, during World War II. While living in the town, the sisters had the opportunity to write to a pen pal in the U.S., inspiring their project with Evansville students today.

In 2010, Palmeri, along with Lorant, visited Evansville to see her granddaughter in a production at UE. The sisters also shared their story of how Amandola gave them shelter, hid them from the Nazis at great personal risk, and saved their family’s lives.

“CYPRESS had brought Holocaust survivors before, but never a pair of siblings,” says Abrams. 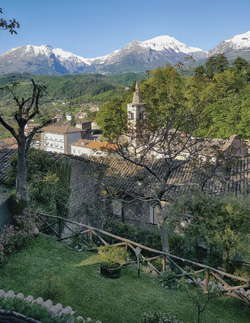 CYPRESS was founded in 1999 with the mission of building respect and appreciation for diversity in Evansville’s schools and community. One way they accomplish this is by hosting speakers to talk at local schools, churches, and organizations.

“Ena and I actually had not told our story together before,” says Palmeri, who now lives in Wellesley, Massachusetts, with her husband and family. “I think we spoke once in all the years. I don’t want to say I denied all my past history, but I never talked about it to almost anyone.”

Though Palmeri and her family moved to Rome after the war, then to the U.S. about six years later before Palmeri’s 16th birthday, she and Lorant, along with their husbands, have returned to Amandola many times.

“In the very beginning, I did not tell my story even to myself,” she says. “I just didn’t. ‘I was so lucky. I grew up in Italy,’ if people asked me. I denied a lot of what I’ve gone through. Until about 12 years ago, I must say, just before we went to Amandola for an official ceremony. I was asked to talk to a group of school children who attended Hebrew school in a temple. That was my first time.”

Palmeri now says sharing her story is rewarding, but also notes, although they lost a grandmother, two uncles, and an aunt, they were lucky compared to other families who endured many horrors due to the Holocaust. Everyone in her immediate family survived, even her father, who miraculously was reunited with them after the war.

“It’s not difficult anymore,” says Palmeri. “I don’t feel any bitterness whatsoever, because that’s just not the way I am. I just can’t feel that.”

Three years after her first visit to Evansville, Palmeri and her husband returned for their granddaughter’s graduation from UE and spoke once again in a class at Thompkins Middle School. While speaking about her experience and how the town of Amandola protected Palmeri and her family, she had an idea. The Thompkins students could be pen pals with students in Amandola. 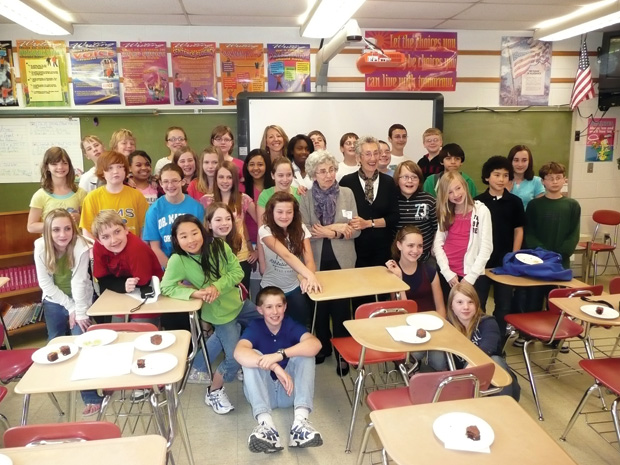 ▲ Lorant and Palmeri came to Evansville for the first time in 2010 and visited a sixth grade class at Thompkins Middle School. The pen pal project will begin its fifth year this fall, connecting Evansville students to students in Amandola.

“I remembered how excited my sister and I became when, just around the end of World War II, we were told we could have a pen pal from the U.S.,” she says. “That was such an incredible thought, that we could connect with somebody in another country.”

Palmeri says she asked the students if they would want to write to students in Amandola, not knowing if anyone would be interested. Almost every hand in the room shot up. 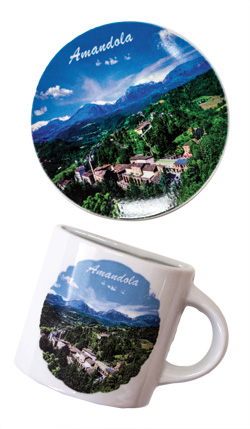 The pen pal program will begin its fifth year this fall and has connected the Italian mountain town to the River City.

“The thing that is interesting is if you go to Amandola, Evansville is the capital of the U.S.,” says Abrams. “They know all of this stuff about Evansville and about Indiana.”

During the project, Thompkins students are paired with students of the same age in Amandola. They write an introductory letter for a grade, then are encouraged to write and email back and forth as much as they like. Sixth grade English and social studies teacher Rebekah Hodge says she tries to match students together who have common interests or share hobbies to teach them how many more similarities they have than differences.

“They’re like, ‘Hey, he plays soccer, or he plays lacrosse, or he has a brother, a sister. They like this kind of music,’” says Hodge. “It’s an exciting time when we get that package.”

“I think it was good to understand different cultures and how they do different things. How other people live,” he says.

Another student in the same year, Claudia Emig, 13, now dreams of traveling to Italy because of the project. She and her pen pal exchanged three letters in the mail and emailed several times throughout the school year. 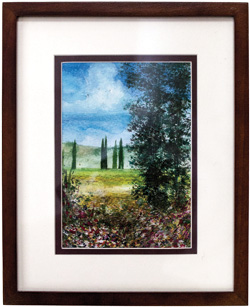 “That was a neat thing getting to learn how her life was different,” she says. “I think it’s fascinating learning what similarities there are across the world. I think it would be absolutely incredible to get to meet her one day and see her city.”

The students in Amandola at the Carlo Ricci Spadoni secondary lower school have had similar takeaways from the program. For their students, however, it also provides the opportunity to practice English with native speakers and peers.

“For me as a teacher, it represents a unique opportunity to get them motivated and involved in a task that is close to real life,” says Daniela Baglioni, the English teacher leading the project in Amandola. “They shared the same interests and the same dreams, sometimes the same problems, too. After all, teenagers are the same all over the world.”

The support and encouragement of the pen pal program became even more important in August of last year when central Italy experienced a devastating earthquake. No one in Amandola was killed, but much of the town experienced destruction. Earthquakes in October and January, which coincided with 6 feet of snow, exacerbated the problems. In all, Amandola experienced an estimated 35,000 tremors and aftershocks.

The damage closed many important buildings in town, like the hospital, and left many without homes. Seven hundred of less than 2,000 residents were forced to live in tents on the local soccer field. For the Thompkins pen pals, it provided an opportunity to show their true support and friendship to their partners in Amandola. 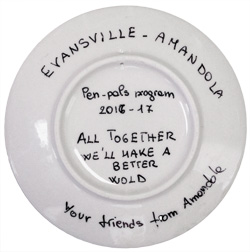 “The students from Evansville expressed their solidarity and their great concern for the difficult situation we were experiencing,” says Baglioni. “They really made us feel close to them with their prayers and sweet thoughts. I remember a letter from a girl who wrote she usually said prayers every night before going to sleep. It was amazing. I was moved to tears while reading it.”

Abrams and her husband Howard planned on traveling to Amandola in November, but, due to the earthquakes, postponed their trip until April. The couple visited the town for four days as part of a longer month they spent traveling throughout Italy.

Abrams met Baglioni and spoke to students in her class. The school even prepared a program with their orchestra and performed two pieces, Beethoven’s “Ode to Joy,” the anthem of the European Union, and “The Star-Spangled Banner.”

“Howard and I were sitting in the front row,” says Abrams. “When we heard our national anthem, we stood up and put our hands over our hearts. All the students saw what we were doing. Everyone stood and put their hands over their hearts, and I thought, ‘This is it. This is it.’ It was so, so moving.” 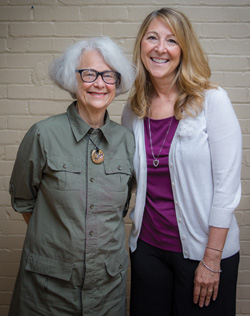 Everyone involved in the program wishes for its continuation and growth, whether that means students eventually will meet in person or continue to develop joint projects. Evansville Philharmonic Orchestra Music Director Alfred Savia will visit Amandola in August to explore the possibility of a collaborative musical project.

For many involved, it is hard to believe such connections between towns 5,000 miles apart all occurred through two sisters’ willingness to share their story. Palmeri says she still occasionally battles with some of the anger she felt as a 5-year-old girl forced to flee her home during the war, but she chooses every day to find the good.

“Ena and I agreed if one could have a dream about how one’s life experiences can make a difference in someone else’s life many, many, many years later, this is the most incredibly wonderful outcome,” she says. “Because the basic story is how a handful of people — of decent human beings — when they find the courage to just be human, kind, and do something for others who are in need and reach out to them and give them hope, shelter, and food, how that can carry on for years after. It can guide so many others later on in life. That is the most incredible outcome of being able to inspire others and tell our story.”