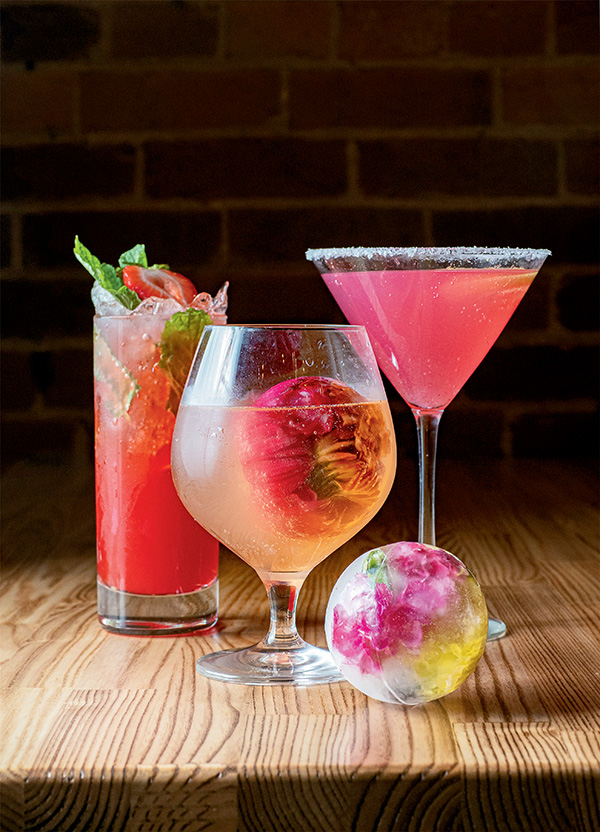 Slip inside the front door of Entwined Wine & Cocktail Bar at 303 Main St. and it may seem as if you’ve stepped into a small wine bar in Sonoma, California, or Seattle, Washington. And it’s that exact experience owners Sharon and Morgan Lemond have strived to create in Downtown Evansville.

“We thought the city needed something like this,” says Morgan. “Pairing Sharon’s interior design skills, the location, and my business background, we came up with a real dynamite concept.”

The mother-and-son duo have succeeded in their goal, opening Entwined in late February in a space that offers a relaxing atmosphere with an eclectic menu of food, wine, and cocktails. Though touted as a wine and cocktail bar, the restaurant portion of Entwined is just as important to the concept of the business as its drink selection.

“Since we decided we were going to do food also, we created a menu where the food and wine pairings really highlight the flavors of one another,” says Morgan. “So a lot of our food items are specifically there to pair well with certain beverages, certain flavors.”

To help create this dining experience, the Lemonds called on someone very familiar with Evansville — Chef Walter Edwards.

“This is a different restaurant, and the concept has been well received,” says Edwards. “Our approach is that the menu is wine driven. When you have 30-plus wines by the glass, there is something in there that should fit anyone’s taste.”

Edwards also recommended the hiring of Entwined’s head chef Stephanie Hay. The pair have been a part of the Evansville food scene for many years. Hay’s resume includes stints at The Cooper House in New Harmony, Indiana; the Petroleum Club; and Café 111. The food menu has both lunch and dinner offerings, used by Edwards and Hay before in a St. Louis restaurant, and touch on a range of tastes, whether customers are looking for something light and packed with flavor or a meal that’s a little more filling. 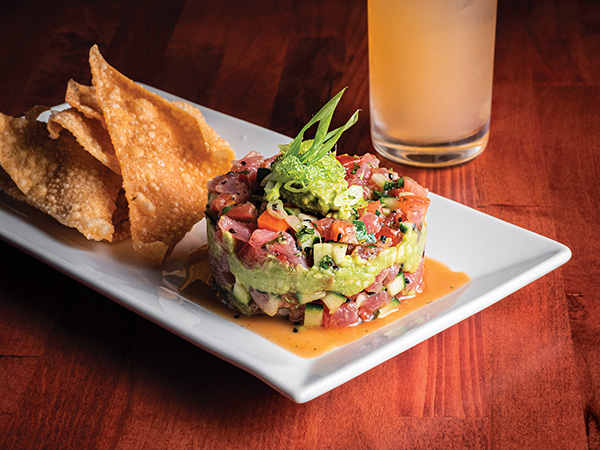 “What makes us stand out is the quality of our product. We put a lot of thought and care into our food,” says Hay. “I like to think of our food as eclectic because we have an eclectic menu. It has a lot of different foods and we can go all kinds of different places with the menu.”

Since opening in late February, customers frequently gravitate toward the tuna tartare and meatballs with tomato sauce. The tartare combines fresh Ahi tuna, cucumber, green onion, diced tomato, cilantro, avocado, wasabi tobiko, and chile-lime sauce that can be scooped up with fried wonton chips. The refreshing dish packs a ton of flavors in a light offering.

“It’s fun to make and has very complex flavors in it,” says Hay. “It’s something that you can eat that’s not real heavy.”

On the newly introduced lunch menu, Edwards and Hay have crafted a combination of soups, salads, and sandwiches perfect for the midday meal. The Reuben sits at top as a popular choice with its house-made pastrami, chipotle slaw, and swiss cheese on grilled marble rye bread.

Hay looks forward to exploring more flavors for Entwined’s offerings as seasons change and diving into different international cuisines and seafood items. Vietnamese- and Thai-inspired dishes are first on her list, as well as seafood that she can get fresh on a daily basis out of a distributor in Louisville, Kentucky. And as the weather turns cooler with the fall, Hay says to be on the lookout for southern-style specials like shrimp and grits and braised meats. As the food menu adjusts, Edwards also will adjust the wine menu to keep true pairings available for the dishes.

“I have a good culinary playground here,” says Hay. “I get to play with different flavors, different cuisines and know they are going to be paired properly with the right wines, beers, and cocktails.”

The third important aspect of Entwined’s offerings are found on the special cocktail menu. To craft up this menu, the Lemonds hired Clint Walker of Tulsa, Oklahoma. Walker’s extensive knowledge comes from years serving behind the bar in several establishments, including on the island of St. Thomas in the Caribbean. Alongside the extensive wine list, beer, seltzers, and mocktail selections, Walker has created a cocktail list that pays homage to classic drinks.

“I like to take original, old-school classics and put a little twist on them,” he says. “Old fashioneds are my go-to cocktails, so this menu has a couple drinks that are a twist on the old fashioned.” 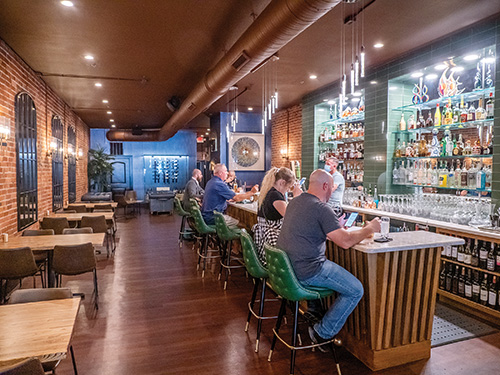 Walker says creating the menu was also about telling a story with the drink names. All the cocktails on the menu feature a name that has meaning for the Lemonds and their family. One such cocktail, the Jim Dandy, is perfect for both the bourbon lover and novice. Complete with lemon, orange, cherry juice, bitters, and St. Germain mixed with bourbon, the cocktail is topped with Sprite, creating a mellow drink.

“It’s very approachable, anybody can drink it,” says Walker.

The First Lady, another popular creation, mixes together grapefruit vodka, St. Germain, and prosecco and is finished off with an edible flower ice sphere, which is a show stopper.

“People are blown away by it,” says Walker. “It’s a very refreshing cocktail and very strong.”

With strong, positive feedback since reopening after the COVID quarantine, Morgan hopes to build on Entwined’s presence in the Downtown community. With the menus changing with the seasons and the tastes of customers, the wine bar and restaurant is a place perfect for anyone looking to unwind and relax.