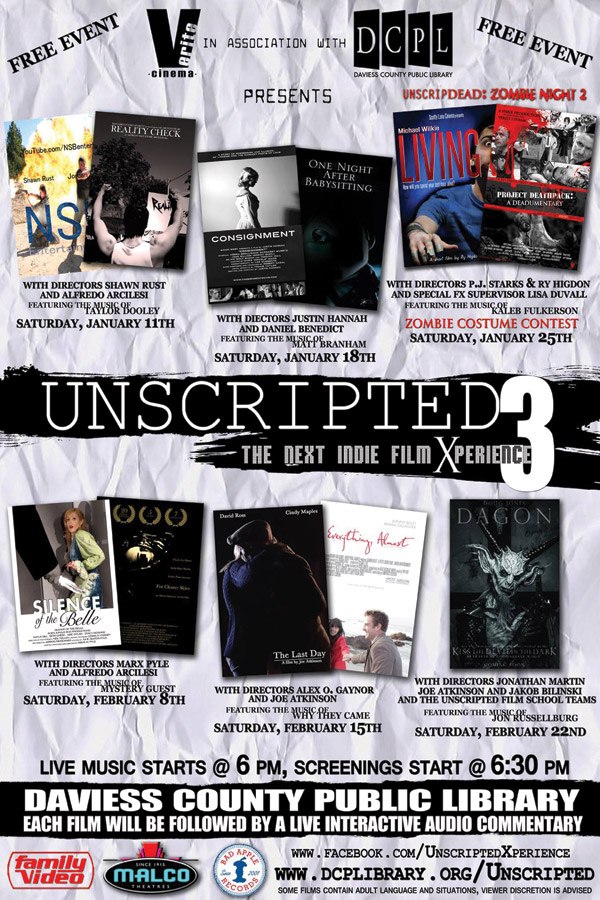 Owensboro filmmaker P.J. Starks didn’t get into making movies to change other people’s lives. The 31-year-old simply enjoyed what he was doing. The rest just fell into place.

Starks’ first feature film “Hallows Eve: Slaughter on Second Street” premiered to an audience of more than 200 people on Halloween 2008 at the Owensboro Community and Technical College.

“I was sitting back and watching how everyone reacted,” he says. “You learn really fast what works and what doesn’t work. I wasn’t trying to do anything groundbreaking, but it was really a stepping stone for me … It has gained fans that range from young to old. People you wouldn’t normally think would be into horror have enjoyed it.

“Some people reach out for advice and others don’t want any help at all, but just want to tell me they have been inspired to follow their passions because of me,” Starks says.

That’s because “Hallows Eve” paved the groundwork for Starks’ other brainchild, Unscripted: An Indie Film Xperience. Through a partnership with his production company, Verite Cinema, and the Daviess County Public Library, Unscripted is a free independent film series which showcases short films submitted by filmmakers from the Owensboro area and beyond. The series has created an outlet for fellow filmmakers to show off their talents and engage with viewers.

Local sponsors provide free popcorn and drinks while audience members watch their first viewing of the film followed by a brief Q&A session with the director. On the second viewing, the audience and filmmaker participate in an “unscripted” audio commentary experience, Starks says. The audience will learn all of the different facets of filmmaking from the filmmakers themselves.

“I wanted to reinvent the special feature,” Starks says. “(Library Director) Jim Blanton said it has been one of the most successful turnouts. We had over 250 people come to the first series.”

The first Unscripted six-film series ran the last three weekends in January and February 2013, featuring one local film production each Saturday. Because of the notable success, a second series launched in June and July, and it now returns for its third Jan. 11 at Daviess County Library. Unscripted 3 runs the last three Saturdays in January and February.

Depending on the length of the film, Starks says they will screen one film a night, possibly two. The films range in length from four minutes to 35 minutes at the most.

The lineup for Unscripted 3, sponsored by Family Video and Malco Cinema 16, includes Evansville and Owensboro area directors such as Starks, Marx Pyle, Joe Atkinson, Jacob Bilinski, and Daniel Benedict. The series also has filmmakers from Louisville, Ky., and as far as Los Angeles and Canada.

Starks’ local influence also has spread to Family Video, 1212 J R Miller Blvd., Owensboro, where the rental store has a section dedicated to short and feature-length films by Owensboro area filmmakers. There are more than 40 titles encompassing every genre.

Starks didn’t stop there. He’s also behind bringing Owensboro’s first and only all genre film festival, the River City Festival of Films, to the area. The six-hour long film festival charity event gives local filmmakers a venue to screen their work to the community, while also giving back to area organizations.

For more information on Unscripted 3: An Indie Film Xperience, visit facebook.com/UnscriptedXperience or dcplibrary.org.