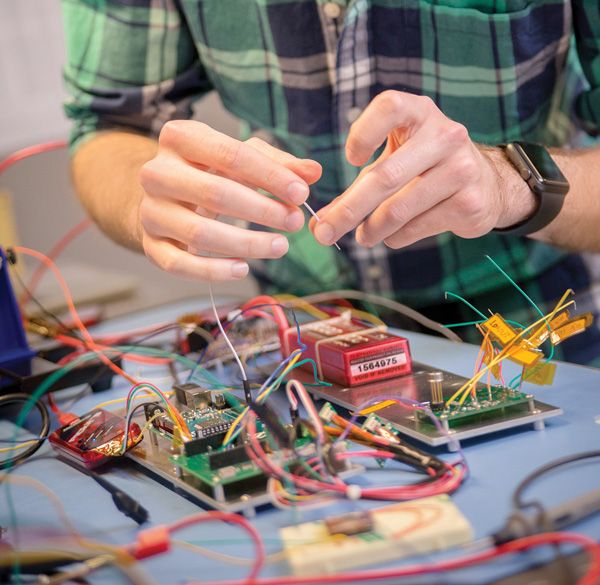 Space often is referred to as the “final frontier” of human exploration. But for a team of engineering and physics students at the University of Southern Indiana, space exploration a little closer to home is their ultimate goal.

In April 2016, NASA awarded a grant to enable USI students to design, build, and operate a CubeSat as part of the program’s Undergraduate Student Instrument Project. CubeSat units are miniature satellites — 10 by 10 by 34 centimeters in size — known as U-class spacecraft generally used as a way to help gather data in space.

USI has had a high-altitude balloon program since 2008, explains team leader and engineering senior Adam Will, but this is the first CubeSat designed and built by a team from the university. Currently, 10 students are on the project team, with members joining and leaving the group as they begin classes or graduate.

“Only undergraduate students are allowed to be on the team. That makes it kind of unique compared to other CubeSat projects,” says project mentor and USI Associate Professor of Engineering Dr. Glen Kissel.

After a likely launching from the International Space Station, the satellite will move into the 300-kilometer range above the Earth to study an area of the atmosphere normally not documented.

The CubeSat will collect full measurements of plasma density and temperatures, temperatures of the spacecraft, and orbital decay as it continues its descent back to Earth.

“Basically we’re measuring space weather,” says Will. “There’s ionizing radiation that comes in from outside the Earth, and it hits the atmosphere and ionizes particles.”

“Part of the uniqueness of the CubeSat platform is we’ll be able to take continuous measurements,” adds Wyatt Helms, communications lead and engineering junior.

The group will turn over the CubeSat to NASA Feb. 1, 2018, with a launch date to be announced after. Once in orbit, the students can analyze the data directly at their lab, thanks to different components and apps they’ve developed themselves.

“Because there are few missions that go to this altitude range, there’s not a lot of data collected,” says Will. “So we hope to contribute to the scientific community by providing some info there.” 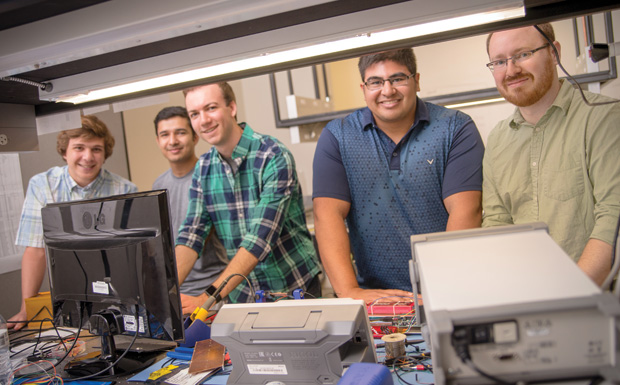 ▲ Two Wyatt Helms, Sujan Kaphie, Zack Snyder, Jose Fregozo, and Adam Will are spending their summer working on a CubeSat miniature satellite as part of a NASA program to gather data in space.

For more information on the CubeSat project, visit wp.usispace.com/wp.