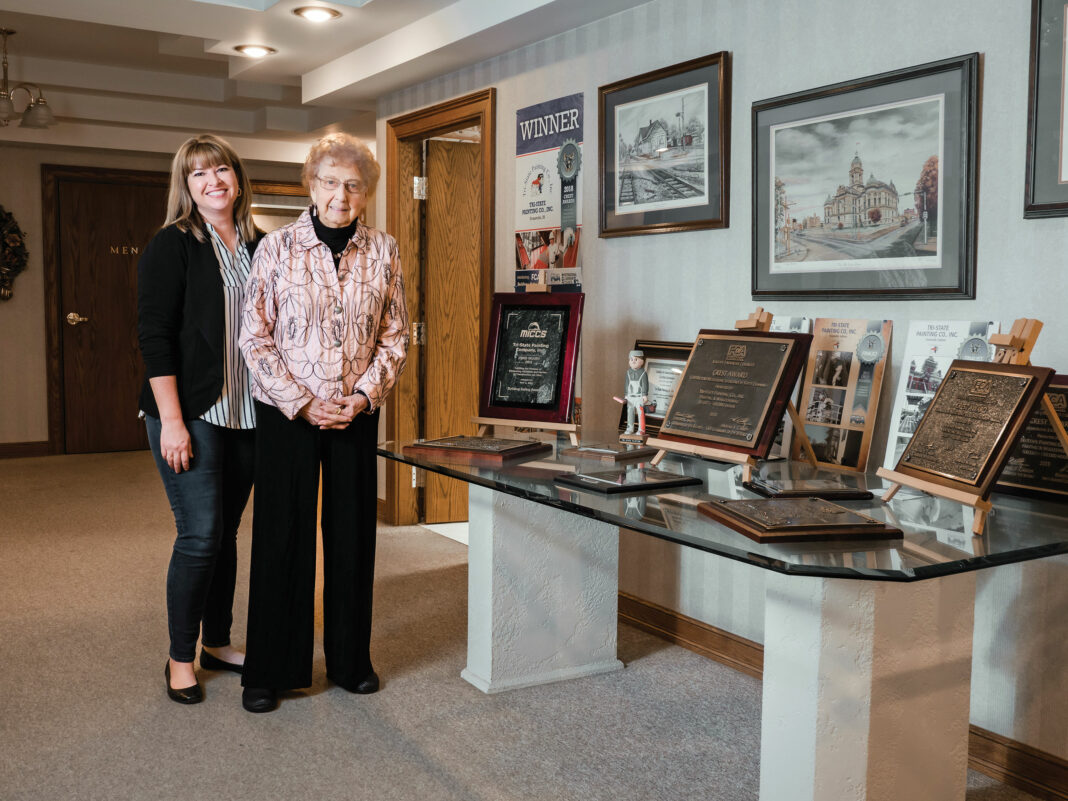 No check passes through the front doors of Tri-State Painting without KewBee McDonald knowing about it.

At a spry 95 years old, KewBee — named for the bread sold in the 1920s by Evansville’s Walsh Baking Co. where her father worked — still keeps a keen eye on the daily operations of the business she founded in 1961 with her husband Charles, who died in 1992. She keeps a manual ledger for accounting, checking all the numbers against the computerized version.

“She” is KewBee’s granddaughter, Penny. Joined by KewBee’s sons Rod, Robin, and Ken, the McDonald family matriarch has continued to oversee the growth and vision of the commercial and industrial painting company, even after transferring majority ownership to now-president Penny in July 2021.

“Our first shop was at 15 E. Riverside, which at the time was a converted gas station,” says Penny. “KewBee’s office was at home for the first 35 years. She used to have a picnic table in her basement, and her three boys would do their homework while she was doing payroll.”

Although her workload has diminished over the years, KewBee has no plans to call it quits yet. She still comes into the office every day and works from her home office in the early morning and evening. KewBee, a University of Evansville Purple Aces season-ticket holder and avid Chicago Cubs baseball fan, works diligently to ensure all accounts are paid on time. The company continues to work closely with the painter’s union, with whom it has been signatories since day one, a point of pride for KewBee.

As the family-owned business transitions to a third generation, Penny says she hopes to carry on her grandmother’s legacy. She serves as co-chair on the training fund for the painter’s union and was the first woman elected to the Finishing Contractors Association International Board eight years ago. She also sits as a trustee on the International Union Painter’s and Allied Trades pension fund and the IUPAT LMCI, an international labor-management fund

“We went from a little company in a converted gas station and a picnic table to now being involved on an international scale,” Penny says.