The Beat Goes on in New Orleans

I have an eccentric friend that can be as refined as a debutante fresh out of finishing school or as ribald as a sailor on leave, a contradictory nature I embraced long ago. When we’re together, I’m her malleable sidekick, always giving in to her unpredictable moods. One minute I’m feasting at a fine dining restaurant as a tuxedoed waiter refills my water glass after every sip, and the next I’m dancing down the street with smeared lipstick and a merry tangle of red hair flying in my face.

I first got to know her in 2006. She had been through tough times and was down on her luck. Last year was no picnic either, but during our March 2021 visit, it was obvious she was regaining that old spark.

My friend’s name is New Orleans.

She survived Hurricane Katrina in 2005 and, like much of the country, she’s coming back from COVID-19, that devasting plague that silenced live music in the French Quarter and shuttered its world-famous restaurant scene.

The first sign the city was coming back to life was the long line at Café Beignet on Royal Street. Normally, a lengthy wait for my first cup of coffee would turn me into a wild-eyed, caffeine-deprived fiend, but I was so pleased at the sight of mask-wearing tourists coming back to the Quarter, I almost forgot about my java fix.

At last, I received my order of beignets — think of them as doughnuts sans the hole that took a long, powdered sugar bath — and steaming café au lait. Perched on a tiny chair in the cheery courtyard, I enjoyed my breakfast as a trumpeter named Tubad played “What a Wonderful World” across the street. At home, I would be munching on a slice of whole wheat toast while talking heads on TV gave me the latest “the-sky-is-falling” news. 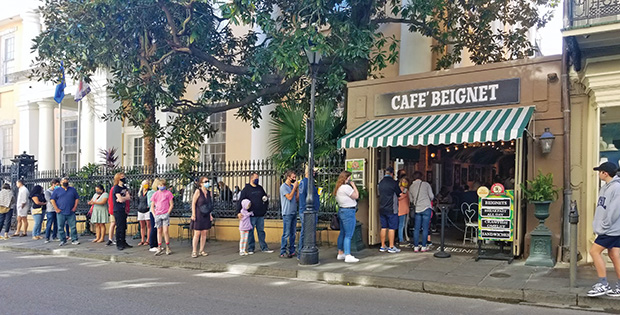 I contributed to Tubad’s tip jar, and we got to chatting. Before COVID, he played venues in the French Quarter, including the Bourbon Street Drinkery. He said the surreal thing about being on Bourbon Street during the pandemic was, “I’ve never seen Bourbon Street clean, but it was clean.”

No way. The city’s most famous street is usually covered in a toxic blend of alcoholic beverages sloshed by a never-ending parade of tipsy imbibers. Plastic cups roll along like tumbleweeds and discarded Mardi Gras beads glow garishly from the gutters all year. (It’s why I often catch the bands on Frenchmen Street).

City guidelines for reopening live entertainment require wind instrument players to use a bell cover, a kind of instrument mask that blocks aerosol droplets. Tubad said some horn players don’t like it, but he doesn’t mind. He’s simply happy to be back “spreading joy.”

That night at the Royal Sonesta Hotel’s Jazz Playhouse, I caught up with Big Sam of “Big Sam’s Funky Nation.” It was the singer and trombone player’s first night returning to the venue he loves, and he rocked the stage big time with a jazzy version of “Papa was a Rollin’ Stone.”

For months he was relegated to the hotel’s pool deck for safety reasons. It’s a beautiful space, but he missed the intimate connection to the audience he has at the cozy Jazz Playhouse.

He gave me the lowdown in a dimly lit courtyard between sets.

“This vibe right here is perfect, you dig?” he said of the Playhouse. “I’m able to interact with people more. It’s like I can have communication and a conversation with everybody through the music instead of being so far away. We become one.”

He’s a hugger, and he said he’ll be glad when he can go back to embracing fans.

When asked what the Quarter was like at the height of the pandemic, Sam’s upbeat mood became temporarily melancholy.

“It sounded like death,” Sam said quietly. “People who were around during (Hurricane) Katrina, they know what I mean. There was no life in the city at all.”

But that’s behind him. Returning to his gig at the Playhouse is something to celebrate. 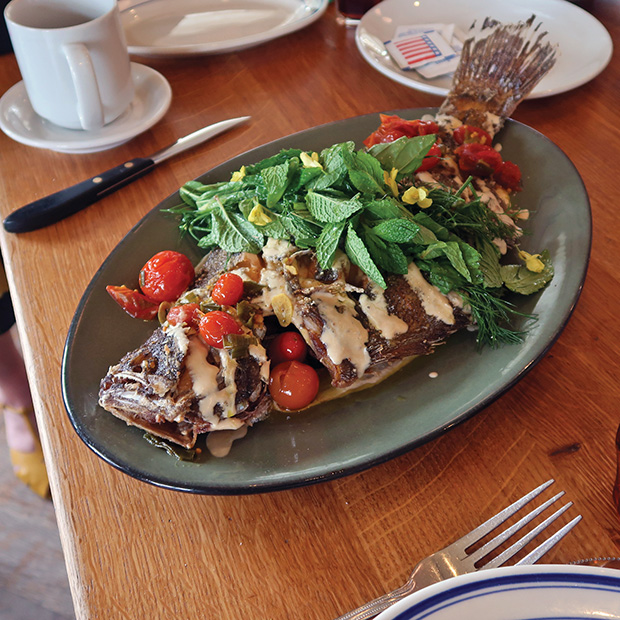 Despite its devil-may-care reputation, New Orleans is serious about COVID safety. It’s worth noting Louisiana was one of the last Southern states to repeal its mask mandate.

A highlight of my time in New Orleans was a long, leisurely lunch at Saba, an Uptown eatery owned by Israeli-American chef Alon Shaya. One bite of a puffy pillow of pita bread dipped in hummus, and I instantly got why there’s so much buzz about this restaurant that serves modern Israeli cuisine. So much for my don’t-fill-up-on-the-bread restaurant rule.

Then the salatim (salad) arrived. It’s not what you think. Tiny bowls of flavorful delights included Moroccan carrots spiced with coriander, roasted beets sprinkled with saffron and dill, and my favorite, baba ganoush – mashed eggplant served with charred leeks.

The pièce de résistance was a whole flounder dusted in corn meal and topped with blistered tomatoes, mint and a bright vinaigrette. Chef de cuisine Copeland Crews created the dish as a Lent delicacy, but you don’t have to be Catholic to love it.

This isn’t Shaya’s first Israeli restaurant in New Orleans. He opened his namesake restaurant Shaya in 2015, but he’s no longer affiliated with it.

“Lots of people said cooking Israeli food would fail in New Orleans,” Shaya confessed. “I’m glad I stayed true to who I am and the food I grew up eating.”

His naysayers had to eat their words, or at least some of that delectable baba ganoush, when Shaya started winning James Beard awards.

He was taught to cook by his grandmother, but this restaurant is an homage to his grandfather. “Saba” means grandfather in Hebrew.

Grandmother is honored at his Denver restaurant, Safta.

Back in the French Quarter that evening, the mood was festive. Laughter spilled from courtyards onto the streets. Horse drawn carriages and pedicabs ferried visitors to dinner. Young buskers played every instrument from the tuba to the banjo.

My old gal New Orleans has got her groove back, or at least, she’s well on her way.