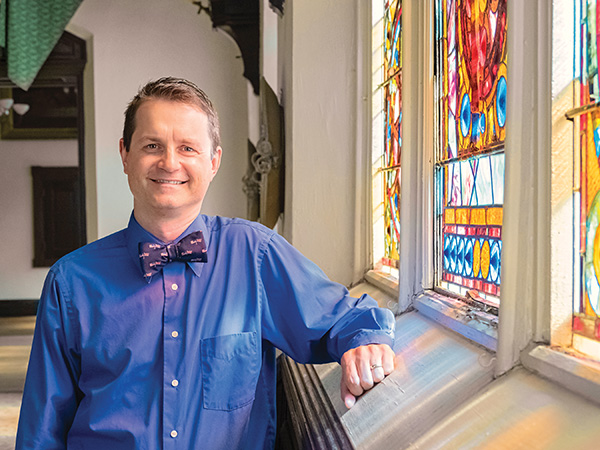 The day that Robert Nicholls moved to Evansville from the U.K. during a gap year before beginning his musical education at the University of Cambridge, Cambridge, England, the organ at First Presbyterian Church was dedicated. About four years later in 1996, he accepted a full-time position as the director of music at the church, where he has led the music program for the past 24 years.

Creating music in the church was natural for Nicholls, who became a chorister at 8 years old at Westminster Abbey in London. Every other year, though, he and his family would return to his mother’s hometown of Carmi, Illinois, to visit family. Before starting college, Nicholls took a gap year and decided to move to the U.S. to experience American life to its fullest. During his year stateside, he played organ for the Washington Avenue Presbyterian Church, now God’s Way Church, which introduced him to Evansville — his future home city.

But it was an amazing experience. And a few years later, when I was at college, half of us — half of all of us — were either at Oxford or Cambridge with choral and organ scholarships, which is extraordinary to contemplate really, that half of all the children in a school end up in the top two universities doing music.

We had to learn two instruments, one of which had to be the piano. We had to do a lot of music theory. We had to study pretty hard. But everything was controlled by that bell, and I would say that’s probably where I learned a lot about self-discipline — how much you can achieve. I think I realized that in retrospect. Gosh, the things I’d done before my 13th birthday — sung for the Queen, sung in Paris, sung 20 hours a week, sung some extremely difficult music that a lot of people wouldn’t contemplate. 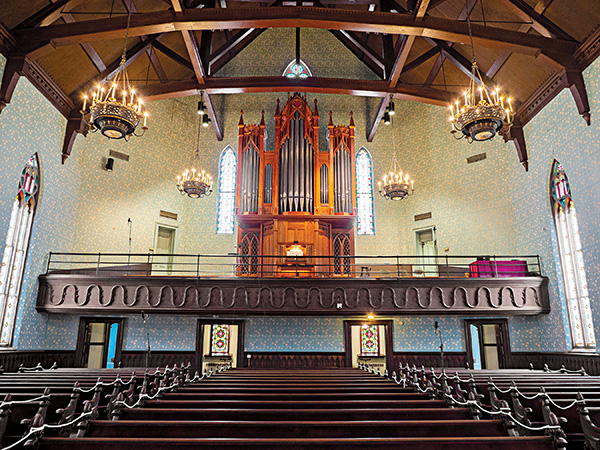 How did you end up at First Presbyterian Church?
It was Christmas of ’95 when my predecessor moved on. He announced his resignation and he took a big job out East, and so Christmas Eve here of ’95 was his last service. They had an interim lined up to do the spring semester, and they started auditioning. Somebody who I’d met during that first year I was here when I was 18 called me up and said, “We’ve got this full-time position, what have you got to lose? Why don’t you apply for the job at First Pres to be the full-time director of music?” I applied, and I got an audition.

I came back, and my first Sunday was Labor Day weekend of ’96. Basically, all through college I didn’t play the organ all that much. I did a lot of singing. I sang tenor in these choirs and made recordings and did a lot of traveling.

At that point, did you see yourself as more of a singer than an organist?
Yeah, the problem was that I found, whenever I got a cold, I lost my voice. I just decided I can’t build a career on this, because I know I’m going to get sick. If you’re sick and you lose your voice and you can’t sing, then you can’t make a living. So that was one of the reasons I decided to apply for the job and just see what happened.

How was it taking over the choir programs at First Pres?
I soon found that whatever I challenged the children to do, they exceeded. They were as good as any choristers I’d come across in my lifetime. You know, they don’t rehearse for as long and they don’t sing as much, but they’re certainly just as good. And given the opportunity, they would thrive in a six-day-a-week singing program.

I always say to the full choir, we all come from completely different places and we all meet here on Thursday night. What we do and what we are able to achieve does not happen by accident. 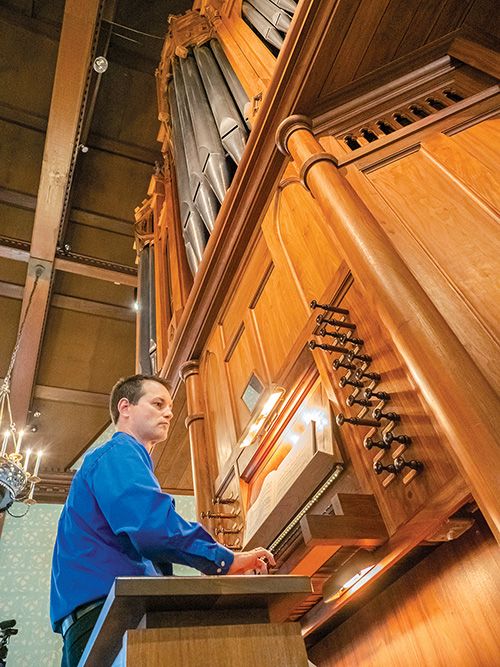 In terms of the programming, do you primarily work with the choir?
I’m essentially responsible for all aspects of the music program at the church. We actually have a flute choir, as well, which is currently on hiatus due to COVID. I train the children to sing. We have an active youth handbell program. And we also have an active concert series. We have the first Fridays. Every first Friday of the year, except July, we have a live concert in here. In the COVID era, I immediately switched to connecting people to the instruments in the space. Every Thursday at noon I start a livestream and play for half an hour.

A friend of mine in Topeka, Kansas, he does Topeka Beer Choir, and I decided, well, why don’t I do Beer Choir Evansville? And that’s been going for maybe our third year of beer choir. That’s a lot of fun, and we’re blessed now with some good beer and local small breweries. We’ve been over in Haynie’s Corner. We’ve been in Myriad twice. It’s an absolute blast.

It’s such a unique way to engage with the community, too.
Absolutely. And while we don’t drink the beer in the church building, it’s a nice thing to say, “Hey, I’m from First Pres. I hope you’re having a good time.” There are folks who show up specifically for Beer Choir, and then there are the ordinary punters who have no idea what’s about to happen. And 80 people will show up and you’re handed a folder of music and you get to sing drinking songs for an hour and a half. It’s been great to interact with complete strangers who had no idea what was going to happen, and they just love it.