This year marks the 100th anniversary of the ratification of the 19th Amendment, giving women the right to vote. Susan B. Anthony, who authored the amendment, was in Evansville a number of times in the 1870s, speaking at a Woman’s Suffrage Association convention held in Evansville in November 1887.

Evansville’s introduction to the subject of women’s rights occurred in 1853, when pioneer women’s rights advocate Lucy Stone spoke at Apollo Hall ( the first theater in Evansville located on First Street between Sycamore and Vine streets.) On Dec. 2, 1853, the Evansville Daily Journal announced her upcoming lectures and noted “our ladies will be present in large numbers to hear something more about their rights than they have yet been able to find out.” The reporter continued by describing her “as a most eloquent and sensible lady” whose “lectures are worthy the attention of the most enlightened.” 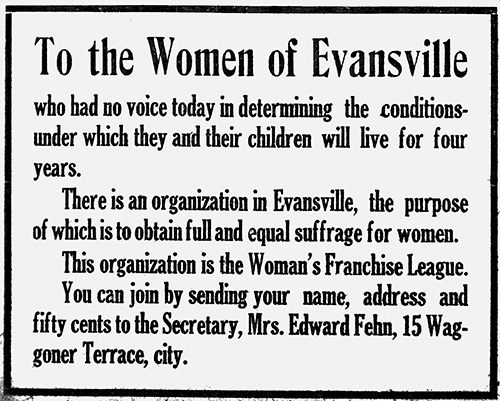 Following her first lecture, the journal published two long articles reporting the lecture in a most favorable light. Stone appealed for women’s rights and part of the lecture was for the elevation of women. The best part was her appeal for working women — Stone championed that women should be paid the same as men for the same work and she urged women not to confine themselves to sewing and housework. The professions and mechanical branches could be as well filled by women as men, she added. It concluded that the positions assumed by the lecturer were sensible and unquestionably correct.

Stone’s lectures caught the attention of many, and so the seeds for women’s rights had been planted in Evansville.