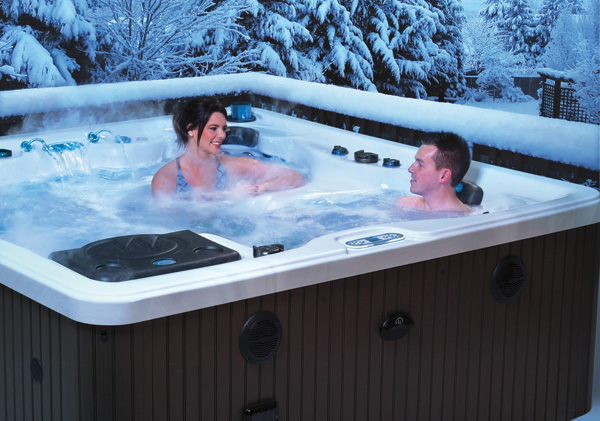 Lounging in thermal springs or spas has been popular since the days of Ancient Greece, if not earlier. It was seen as therapeutic, able not only to relax muscles but also to ward off illness.

Today’s spas offer many of the same benefits, providing relaxation, health benefits, social experiences, and lots of fun. Spas come in all sizes, from those accommodating two people up to those that fit 12, and some of the newest features are focused on providing relaxation and entertainment.

Jeff Friedlund is the owner and president of Spa City USA, which celebrated its 20th anniversary this year. He says modern spas offer all of the benefits spas have always had, along with some very modern touches.

“They have waterproof speakers built into the spa so you can plug your phone or iPod in,” Friedland says. The newest spas also feature LED lighting with interchangeable color.

Spas — even those installed outdoors — can offer year-round comfort. A spa can be particularly alluring for those suffering from arthritis or similar ailments that can worsen during colder weather.

“Hot tubs were more like a tub with a couple of jets in them — just like a tub of hot water really,” says Friedlund. “Spas are more therapeutic. They have jets in them in different positions for your neck, shoulders, upper and lower back, legs, and for your feet. It’s like a home massage.”

Spas don’t require any special equipment or plumbing to be purchased, only a flat, solid surface. They can easily be filled with a simple garden hose and covered when not in use to keep out leaves, rain, and snow.